Minto has a long history of building townhomes, and with each decade the designs became more luxurious than those built before. In the 1960s and into the 1970s the townhomes Minto built were modest in size and straightforward rectangular designs. Later in the 1970s, Minto’s garden home designs began to experiment with a wide variety of layouts that thought outside of the box, setting the stage for what was to come. It was only in the 1980s that it became commonplace to have townhomes with attached garages, appearing on both freehold and condominium variations. During this time Minto’s townhouse designs started becoming larger, and some were even based off of former detached home layouts. 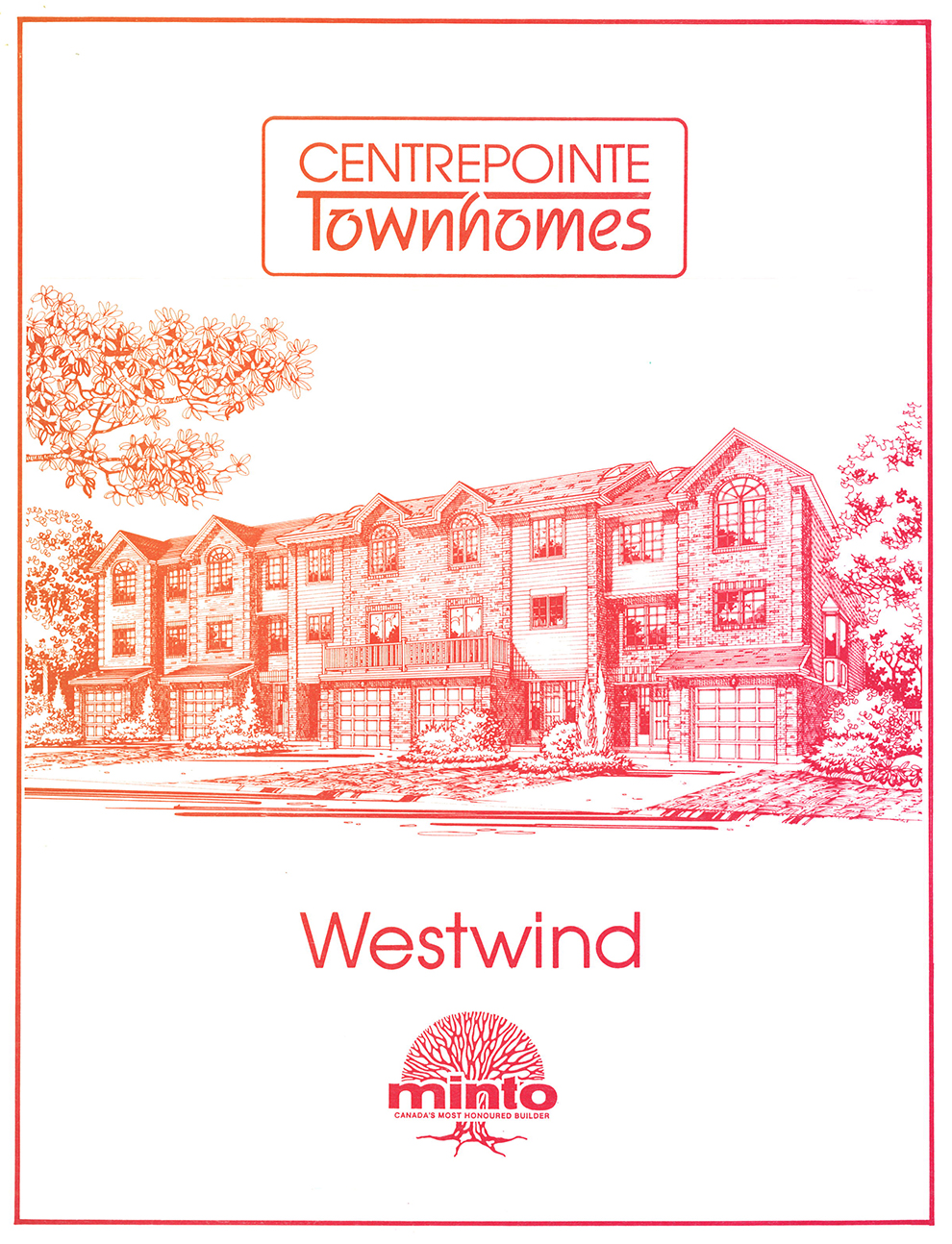 One of the most popular townhome designs ever built by Minto is the Westwind, a three-storey model that was constructed during the 1980s across the city with a handful of variations and was even available in semi-detached and detached versions. The spacious layout has the garage and family room on the ground floor, with the kitchen, dining room and living room on the second floor, and the bedrooms on the top floor. By placing the main living spaces above the garage, large windows are possible on the front and back of the home on this level. In earlier years having an ensuite bathroom in a townhome would have been seen as a rare luxury, and even then, many only had a toilet and sink. However, this was one of Minto’s earlier designs to have a full-sized ensuite bathroom. 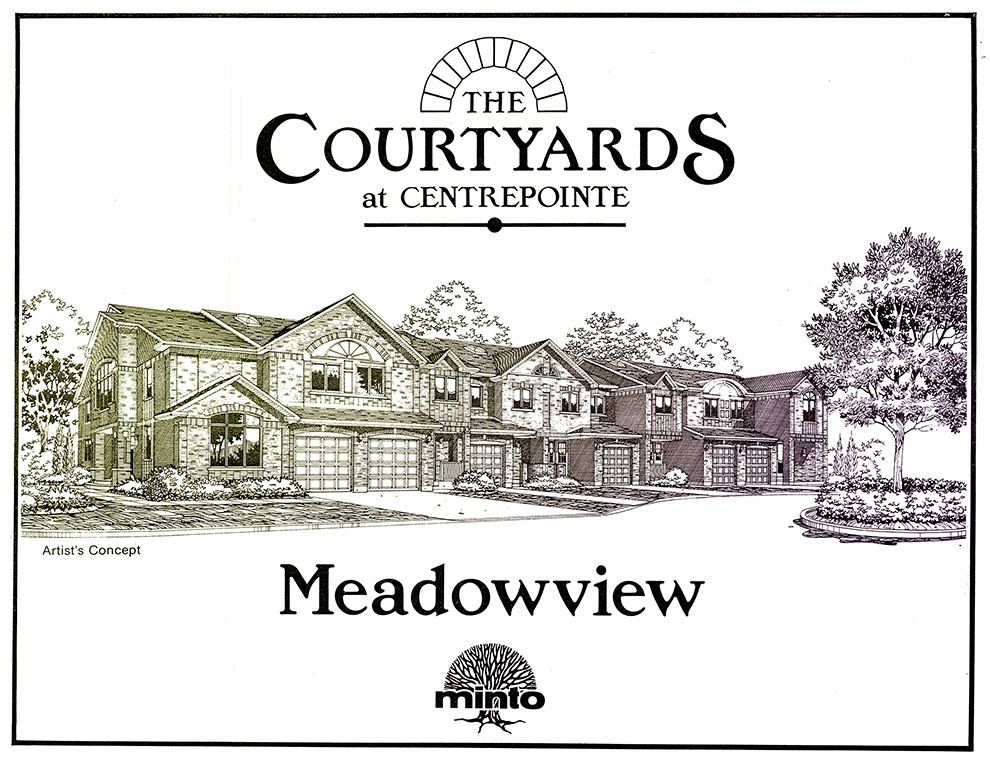 In the late 1980s, the Courtyards at Centrepointe brought townhome design to a new level of refinement and luxury. The dynamic plans of these homes have angular walls, two-sided fireplaces, and rooms with two-storey ceilings. The Meadowview has an open atrium with views from the second floor right down to the basement. Room sizes are also remarkably large in some plans, including living rooms as long as twenty-six feet. Some designs even have a main floor den or family room, in addition to a full living room. These homes also have large master bedrooms with walk-in closets and ensuites with step-up whirlpool bathtubs with a large window above. These luxurious layouts even rivalled some of the detached houses in the area. 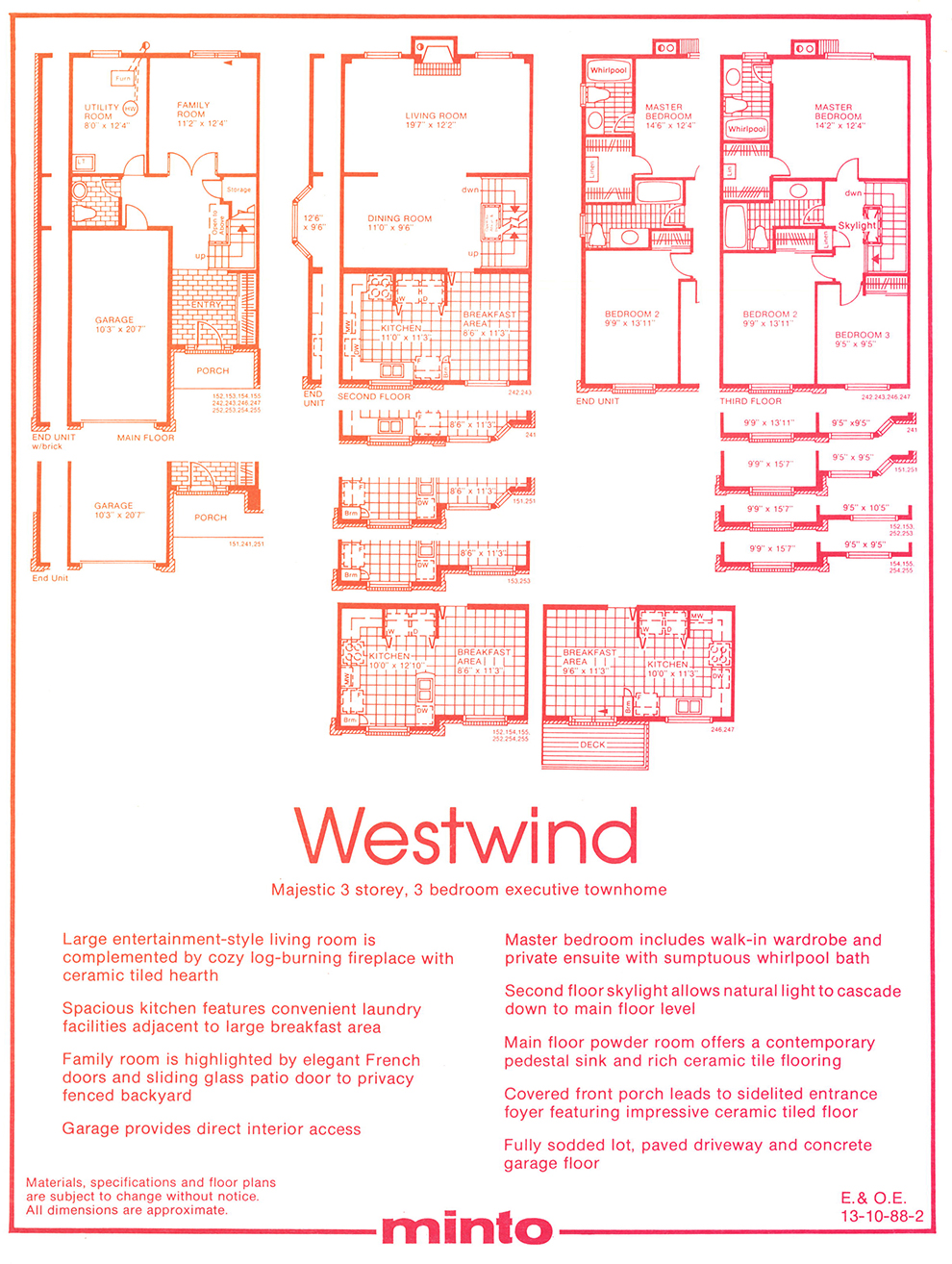 The groundbreaking townhome designs in Centrepointe set the stage for many of Minto’s subsequent townhome designs. In particular, having a finished family room in the basement became standard in the late 1980s, and this is something that continues today. Typically, the master bedroom suite is at the back of the house, spanning the entire width, allowing for a window in the bedroom and the adjoining ensuite bathroom. Two other bedrooms are then located at the front of the house, usually with large windows.

Minto’s Executive Townhomes brought this type of house to a higher standard than before, with some of the layouts that are almost 2,000 square feet. Luxurious features include sweeping curved staircases, vaulted breakfast rooms, large windows, all brick fronts, and master suites with large ensuite bathrooms and walk-in closets. Another collection, the NewStyle Townhouses, are wider than standard, allowing for a front room facing the street and garages recessed into the massing of the house. Main floor offices and master bedrooms with “retreat” sitting areas are also highlights of these plans.