High-rise living might be common place now, Minto has several condos throughout the city, but the 1970s saw a condominium boom in Ottawa. As a result, Minto built Canada's first high-rise condominium — the Horizon House in Parkwood Hills.

The 1970s was an era where Minto brought daring designs to towers across the city. The Brutalist-style architecture was en vogue and characterized by expressive, raw concrete façades made visually interesting through texture and pattern. Brick façades with concrete details also became a common expression on Minto towers at the time. These often-unassuming exteriors belied the spacious and dramatic suites inside.

The sculptural 11 and 12-storey condominiums of 3100 Carling and Chesterton Towers are essentially the same in layout with their distinctive Y-shaped footprint. Each of these amenity-rich buildings has guest suites, heated pools, saunas, penthouse party rooms with fireplaces, workshops, landscaped gardens, three elevators, and contemporary music playing in the hallways and common areas.

In each unit decorative screens separate the foyer from the living spaces, and a door to the bedroom area adds separation. Even in smaller units, these elements create a sense of privacy. The living and dining rooms are completely open as one area, but as was common at the time, the kitchen is completely enclosed with space for a small table. For convenience, laundry rooms are located on each floor, which was very attractive in a time when many condo towers only had laundry facilities in the basement.

Driving down the Sir John A. Macdonald Parkway in the west end of the city it's hard to miss the signature silhouettes of the Ambleside towers. Ambleside One and Ambleside Two are Y-shaped sister towers with amenities that include indoor pools and squash courts. One of the most distinctive elements of the suite plans are the sunken living rooms with dining rooms overlooking them. Seen as a luxury at the time, plush shag carpet was often found in these buildings flowing down the wide steps into the living room. There are some remarkably spacious layouts, including a unit with three bedrooms, a 20-foot long living room, and a separate study. Even the smallest 1-bedroom suites have dramatic layouts with unique angles. 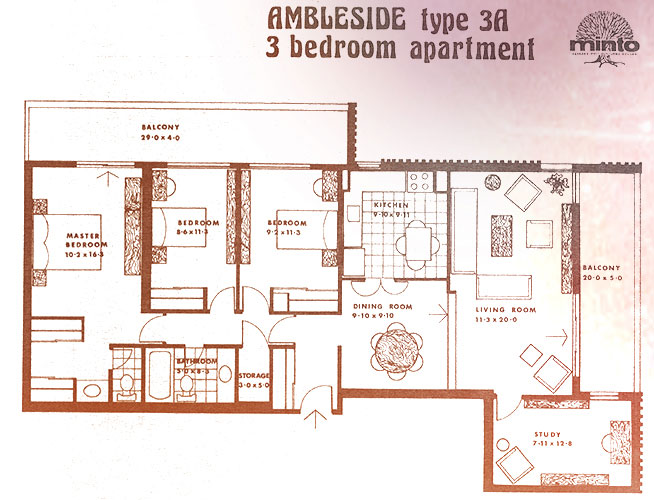 At the base of the towers are townhouses built into the hillside. At the front they appear to be bungalows, but the steep slope creates designs that cascade down two levels from the entry floor to make a three-level house. Ambleside III is located across the street from the other two towers and is a rectangular brick building, but inside the suites are still large and have sunken living rooms.

Even in larger suites, having two bathrooms in a condominium was rare in the 1970s. Yet at Northridge in Beacon Hill, a number of the units have a full bathroom and a two-piece powder room. This building also has sunken living rooms, and most kitchens have a door from the hallway and double doors to the dining room creating a more open concept kitchen compared to other buildings of the time. 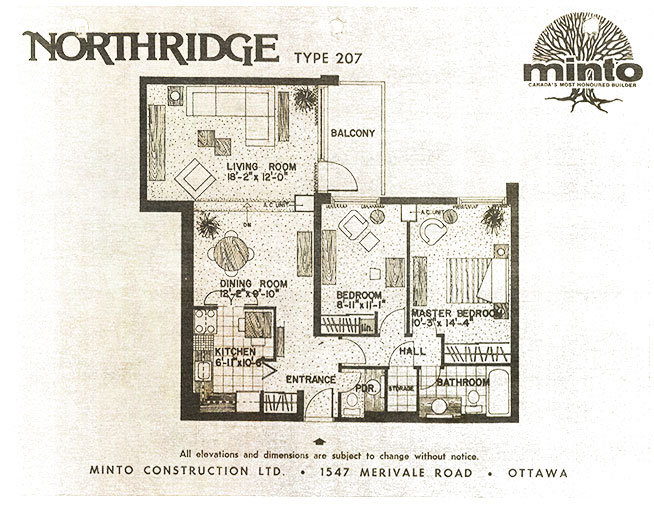 During the 1970s, Minto built numerous other condominium towers in a wide variety of locations. The Y-shaped building is repeated while other buildings are rectangular or T-shaped. The Britannia tower uses angled balconies to break up the massing (a term used to describe the shape and size of a building) of the rectangular tower, while projecting balconies create visual rhythm at Hillsview Place.