Today, Minto's portfolio of new home designs includes a few bungalow plans, but during the 1950s and 1960s, Minto almost exclusively built bungalows in areas such as Parkway Park and Hawthorne Meadows. Perhaps their popularity at the time was linked to the suburban dream of lower-density living on larger parcels of land compared to living in the city. Still in use today, the term “ranch house” to describe a bungalow also hints at this idea of living surrounded by wide-open spaces. Low-pitched rooflines and horizontal windows helped to visually accentuate this idea of a sprawling ranch house. 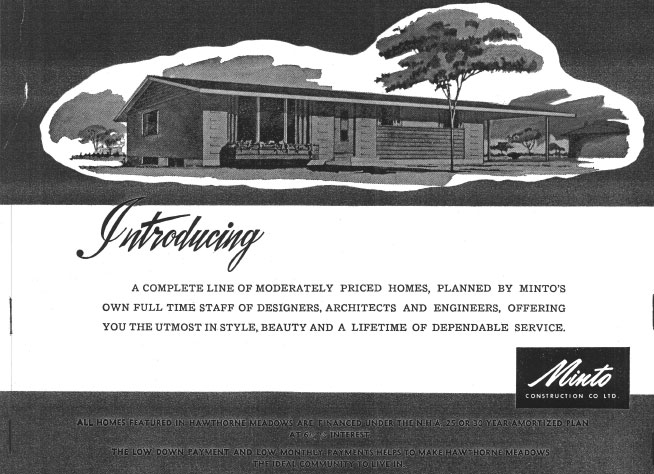 Minto's bungalows, built during the early 1960s, mostly had straightforward and practical floor plans with a single-car garage or carport appended to the side. These houses were often rectangular and thus afforded cost savings due to a straightforward foundation and roofline, making them economical options to buy. For instance, in 1960 the 1,000 square foot Cavalier plan in Minto's Hawthorne Meadows neighbourhood cost $14,450, with monthly mortgage payments of $102.

Most of Minto's designs of the era had living spaces to one side, often with an L-shaped living and dining room combination that placed the kitchen in the smaller corner. On the other side of the house were the bedrooms, typically three, with at least one bathroom. Unlike today, during the 1960s having an ensuite bathroom off the master bedroom was considered a luxury and was not found in all houses of the time — especially smaller ones. For variety, sometimes Minto rotated bungalow designs so that the short edge of the rectangular house faced the street, and the bedroom side of the design was to the back. Minto also had a few L-shaped plans that differed from the typical rectangular layout by pulling the bedrooms forward and tucking the kitchen in behind. 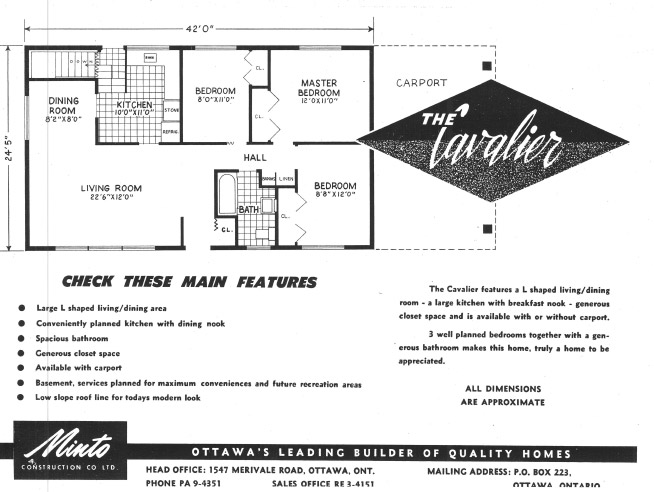 In 1960s bungalows it was common for the basement stairs to be located beside the kitchen and to have direct access to a side or back door. At the time, basements had a more utilitarian purpose, unlike the well-appointed fully finished basements common today, so the staircases to access them were tucked away and not on display in a front hallway.

Minto also built larger and more luxurious bungalows at the time with more intricate layouts, but this increased the price point. A number of these bigger designs won Canadian Housing Design Council awards, but they were not built in large numbers, perhaps due to their higher price.

By the 1970s, bungalow designs became less common and two-story designs took over as the most popular housing type. See what types of houses Minto is building today. With time, lot sizes also became narrower in new developments making it more difficult to build bungalows due to their large footprints. As the Baby Boom population ages, there may be a newfound interest in these mid-century bungalows for their one-level living arrangements. In some instances, Baby Boomers have returned to the same type of housing and areas where they grew up.