In the 1950s and early 1960s, bungalows were one of the most popular housing styles in Ottawa. At that time, it would have been unheard of to have both a formal living room and a family room in the typical suburban bungalow — save for very large custom plans. Informal living spaces were relegated to the basement, normally as a recreation room. In the 1970s, main family rooms started appearing in two-storey Minto plans, but they were usually separate spaces, differing from today’s open-concept layouts. 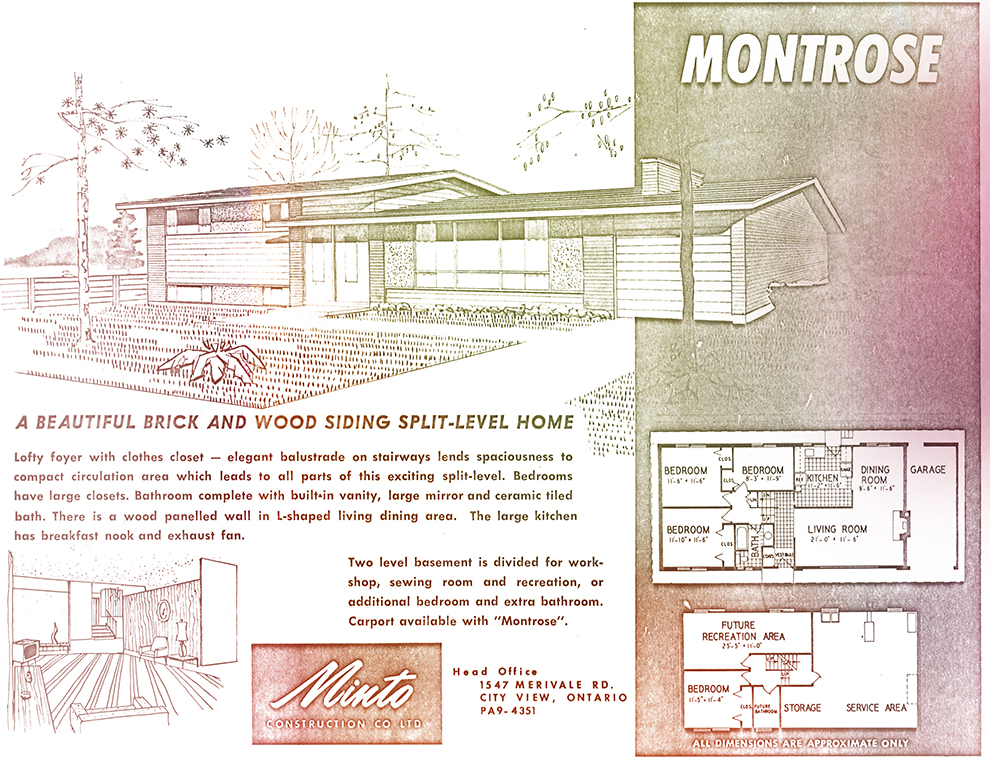 The large basements of bungalows and lower levels of split-levels provided the opportunity for a sprawling informal living space. For instance, in the Montrose side-split plan the “future recreation area” on the lower level is over 25-feet long. Wet bars and wood panelled walls became trendy in these finished rooms. Typically, Minto did not offer a standard finished basement in their new homes. However, during the 1970s and 1980s, some of their townhomes, garden homes, and smaller detached houses were built with a finished recreation room. 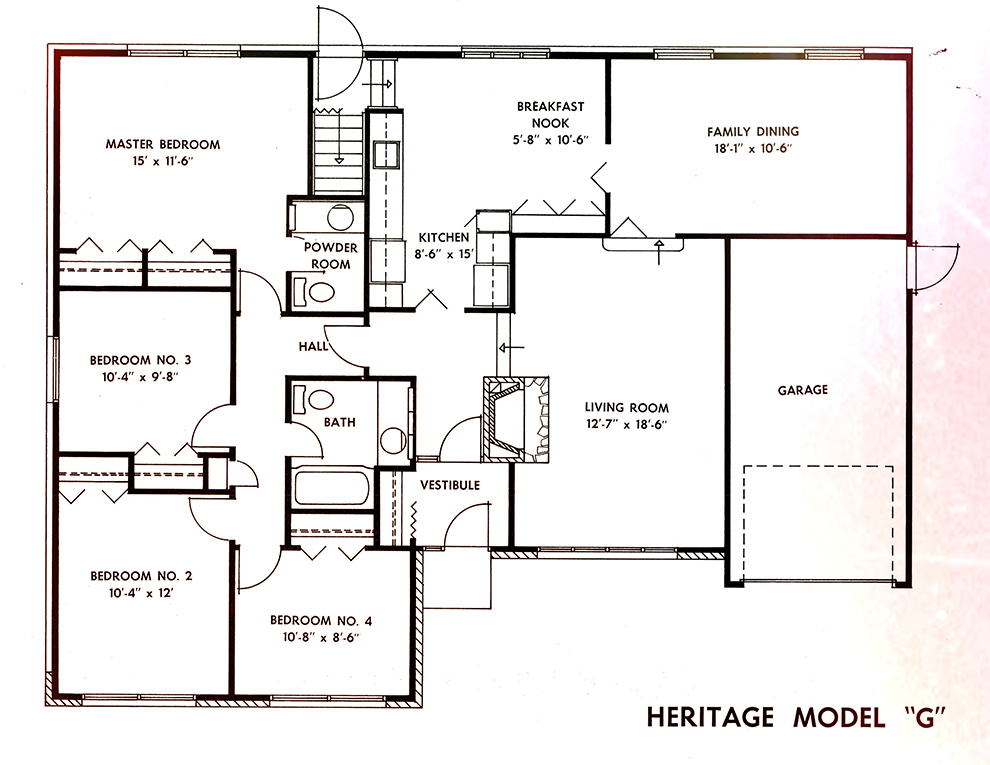 A precursor to main floor family rooms can be found in the combination dining and family rooms that appeared during the 1960s in a few Minto designs. Heritage Model “G” has a separate room at the back titled “family dining”. At over 18-feet long, the room is larger than most dining rooms for a house this size, so the suggestion is that it can have more than one purpose. Curiously, the proposed uses are a combination of a formal dining room, and an informal living space. In other cases, when a plan has an open kitchen with a breakfast bar, such as the Berkley 1, the space next to it may be titled as a family room. Although, its small size would make it better suited to an informal eating area. Trendsetters for the time, the Kingswood and Oakwood designs are very rare examples of semi-detached homes that have a main floor family room. Both plans also have informal eating areas off the kitchen, in addition to a dining room. 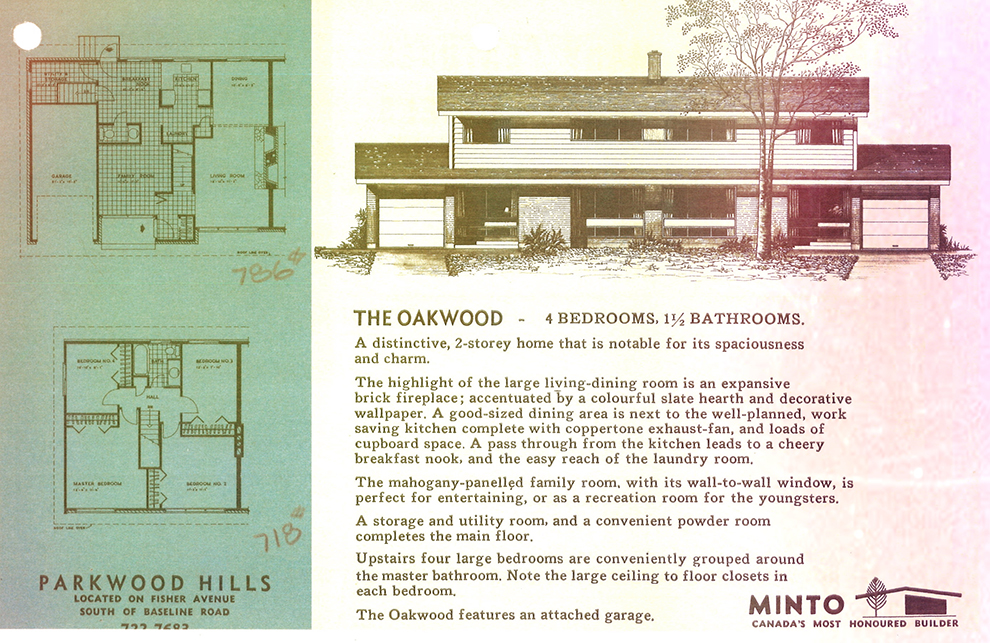 In newly-built homes today it is rare to have a full wall between the kitchen and family room. But, in the 1970s, when main floor family rooms were still a new occurrence in two-storey houses, they were almost always kept separate. The Dorset is a good example where the kitchen is right next to the family room, and a solid wall and door close off the space. Having doors to the family room were common at the time, and interestingly, living rooms were open concept and rarely had doors enclosing them. 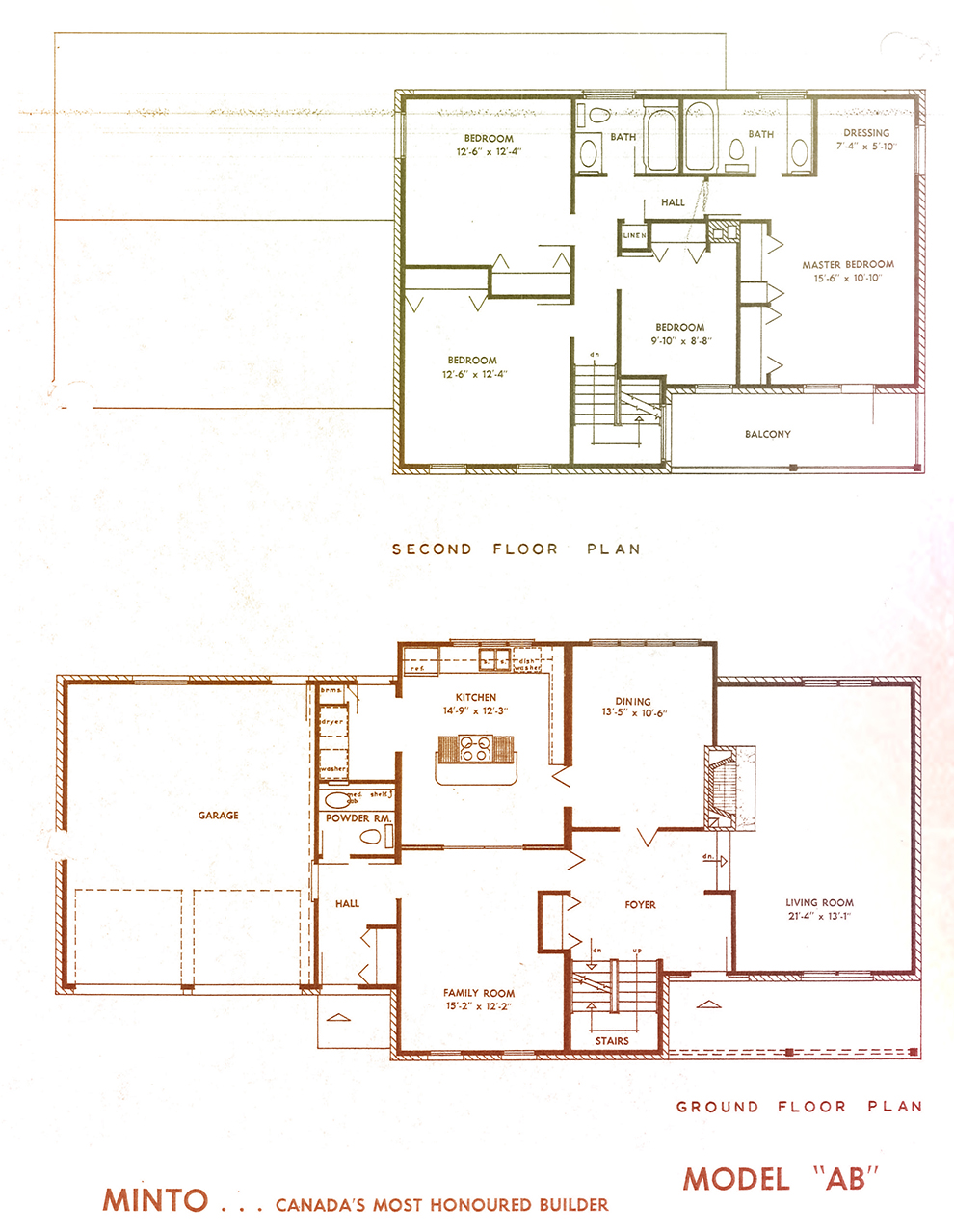 During the early advent of main floor family rooms, some Minto designs had the space at the front of the house, but with time, this room was often built at the back, next to the kitchen and with access to the rear yard. Even today, many Minto plans have an open informal space at the back of the house that includes a family room, eating area, and kitchen. Unlike in the past, modern family rooms are typically completely open to the kitchen and informal eating area, a long way from the completely separate recreation rooms one floor below from earlier years.