In the 1960s, having an ensuite bathroom of the master bedroom would have been a luxury, even a 2-piece with a sink and toilet. But, by the late 1980s it was the norm to have an ensuite in most new houses, and with time this room grew to be as large as a bedroom. To put this in to context, in Minto’s 1963 offering of plans in Crystal Beach only half of the designs had an ensuite bathroom, but they were all 2-piece. In comparison, all of Minto’s 1984 lineup of modestly-sized homes in Centrepointe had ensuite bathrooms, with a minimum of 3-pieces. 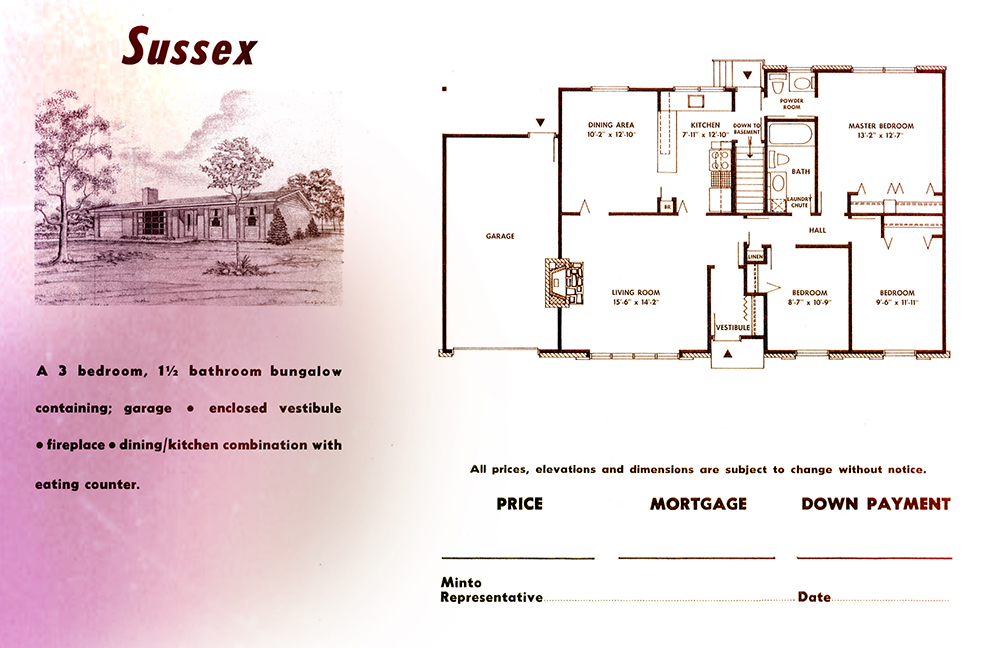 In the early years there were a few unique examples of ensuites, including the Sussex bungalow design from the late 1960s, that has a layout found in very few of Minto’s homes. The small 2-piece ensuite bathroom has a door from the master bedroom, but also a door to the back entry at the top of the basement stairs, just off the kitchen. A more common arrangement in the 1970s was to have a “cheater door” from the master bedroom to the main bathroom allowing direct access to this room in addition to access from the main hall and bedrooms.

During the late 1960s and in to the 1970s, luxurious master bedroom suites included a layout with a dressing room, vanity counter, and sink. To one side is the walk-in closet, and the ensuite bathroom with the toilet and shower/tub, and sometimes a second sink, on the other. Louvered bi-fold doors separate the walk-in and ensuite from the bedroom. This arrangement soon fell out of popularity in the 1980s. 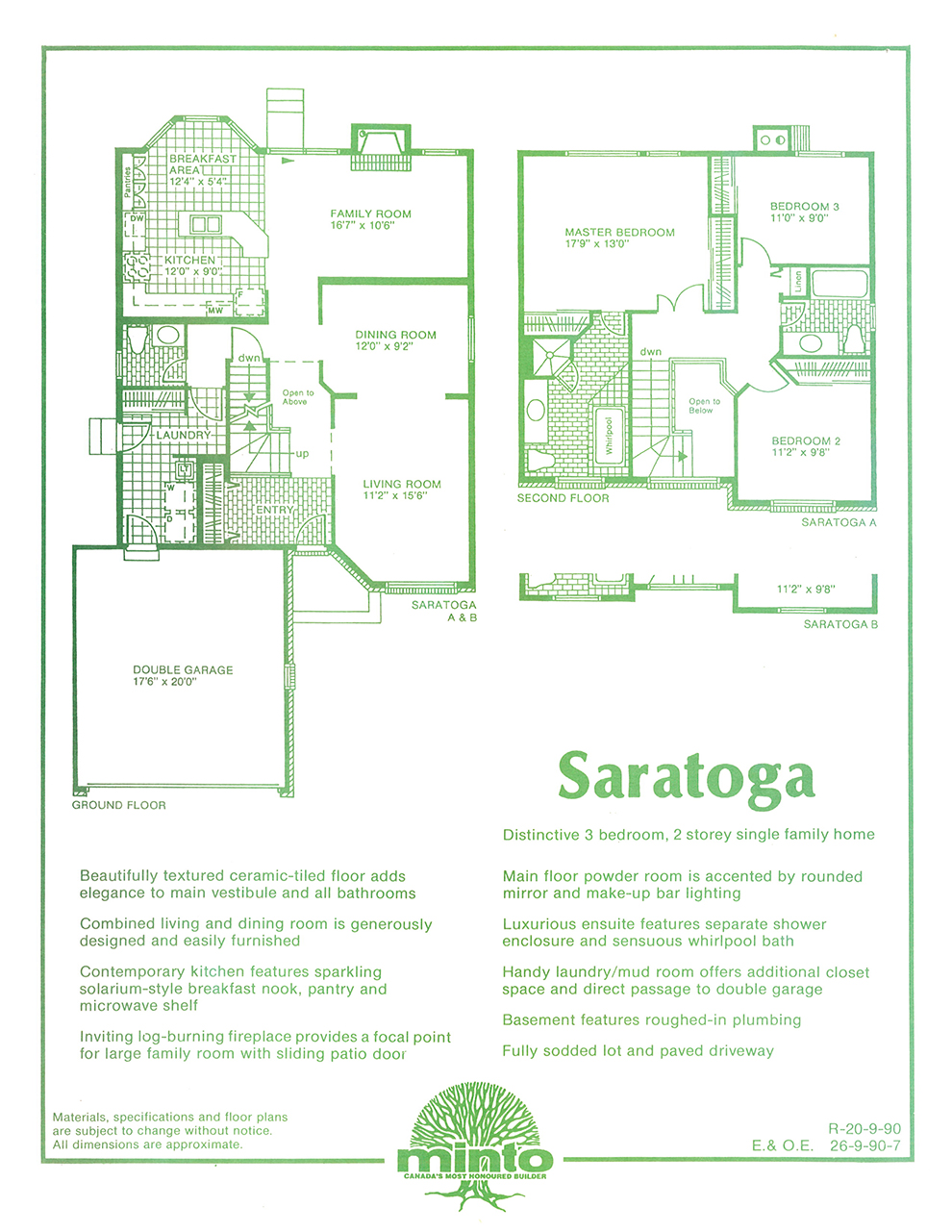 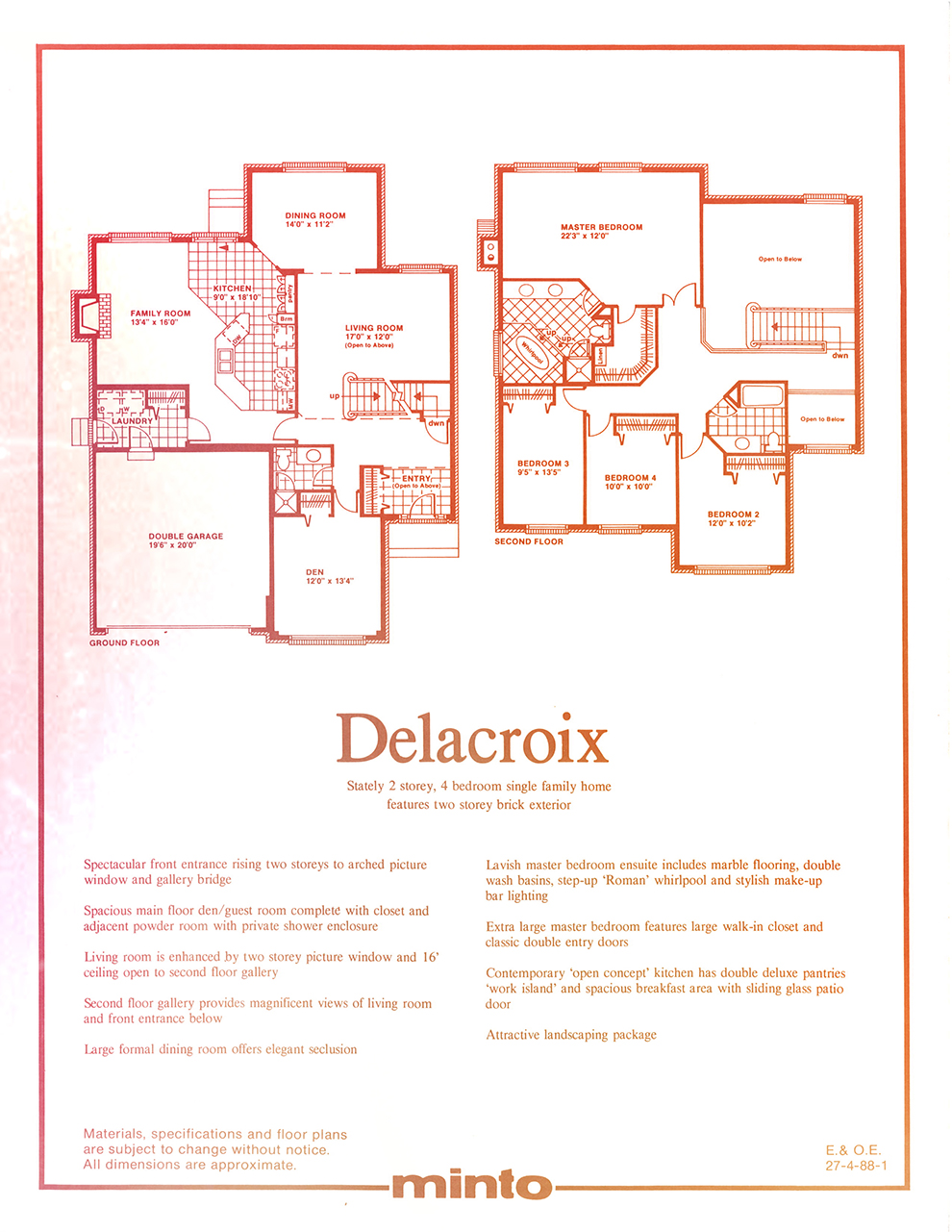 Whirlpool bathtubs became “must haves” in luxurious 1980s and 1990s homes. In many cases, these so called large “Roman tubs” were raised up on tiled platforms, sometimes angled to be even more impressive. In the Delacroix model the tub takes up a huge piece of real estate in the ensuite. To accommodate large tubs, separate showers, and two sinks, ensuites grew to a size never before seen. The ensuite in the 3-bedroom Saratoga plan, built in 1990, is larger than the secondary bedrooms — the master bedroom, closets, and ensuite combined take up more than half of the second floor. In the 1960s, this area in a Minto bungalow plan could have accommodated 3 bedrooms and a full bathroom. 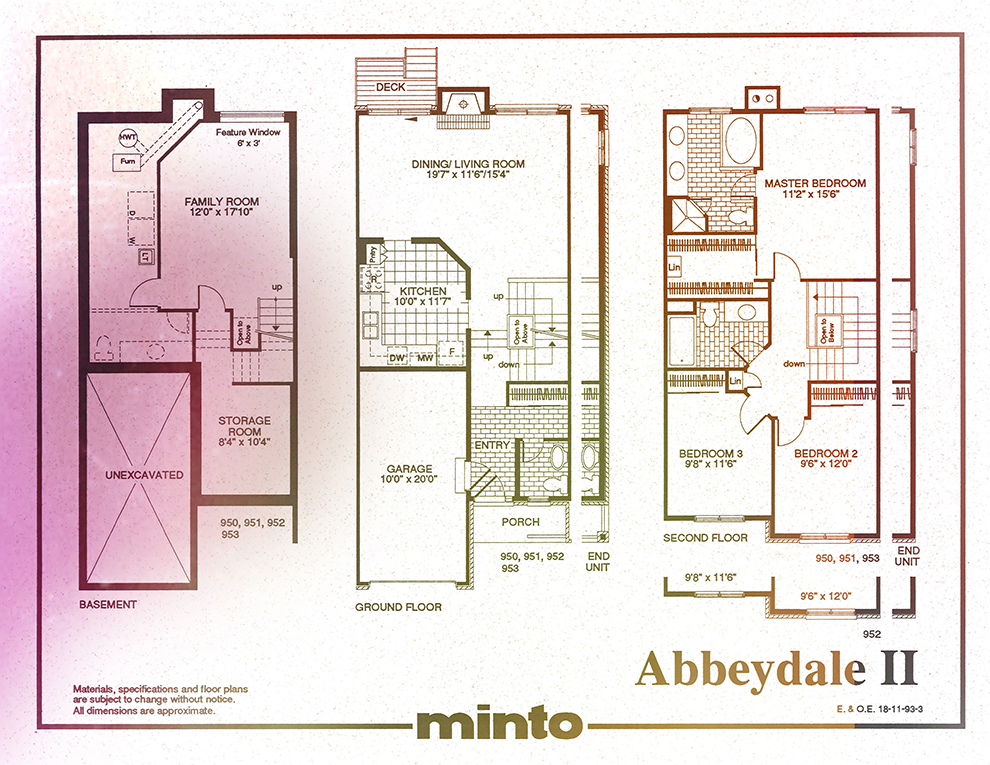 Starting in the late 1980s, large ensuite bathrooms became the norm even in Minto’s Townhomes. The Abbeydale II has an ensuite bathroom that is as large as the kitchen, complete with a Roman tub, two sinks, and separate shower stall. In many townhome plans from the 1990s, a portion of the ensuite bumps in to the master bedroom to make room for a Roman tub. Whirlpool baths continued to be popular in to the early 2000s, with some Minto plans opting to add a wide Roman tub in place of a shower/bathtub combination.

Perhaps the biggest change in ensuite design in recent years is the move away from large Roman tubs, as they are not as popular with today’s families. Many new homes also forego large tubs for larger showers. In some cases, these ensuites have no bathtub at all. This has also allowed these rooms to shrink in comparison to 1980s ensuites.