Today, the kitchen is the heart of the home and new homes are built with that in mind — often leaving the room open to the main living spaces. These rooms are usually quite large, have deluxe appliances, and typically have an island in the centre with a breakfast bar. Given the central place of kitchens in modern life, it may be hard to remember anything different. Yet in the mid-20th century, many kitchens were small and often completely enclosed spaces.

Although they may have been cut off from the rest of the house, mid-century Minto kitchens did have their luxuries. For instance, a Coppertone exhaust-fan, stainless steel sink, “colourful everlasting” Formica counters, Armstrong vinyl tile floor, and built-in Westinghouse dishwasher were all notable features in the 1960s. In addition, teak finished or “award-winning imported walnut cabinets” were originally found in these rooms. Other unique aspects of mid-century Minto kitchens that made them stand out were built-in butcher blocks in the counters, while in other instances there were sections of ceramic tile counter. Broom closets or pantries were also commonplace, even in smaller kitchens. In Crystal Beach, the homes were built with a Canadian General Electric built-in cooktop with ceramic tile surround and an “eye level” oven, yet dishwashers were only available on some models. 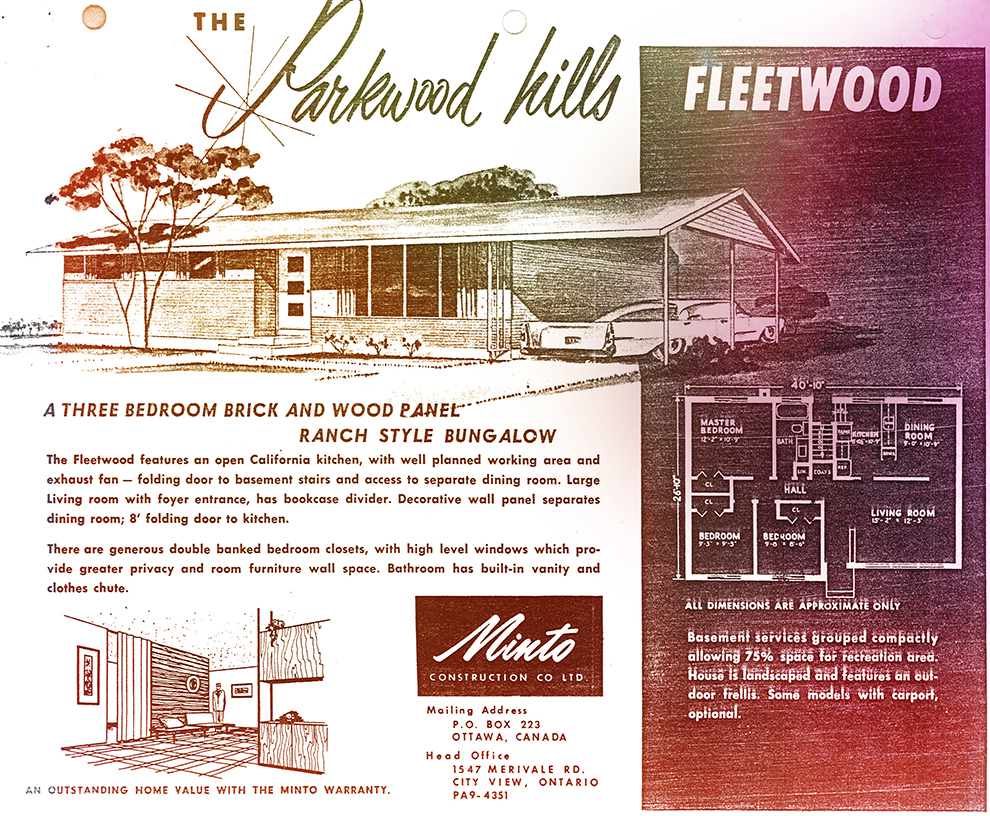 In Parkwood Hills, the Fleetwood design came with a compact “California Kitchen”, and was one of the very few plans where the kitchen was partially open to the dining room — the peninsula counter had cupboards above preventing an entirely open kitchen. This layout varied from others as the kitchen did not have a small area for a table. Instead, the dining room is the only designated eating space in the home. Moreover, the dining room is separated from the living room with a wall. This was another difference from other designs where the living and dining rooms are completely open to one another, and it is the kitchen that is typically closed off. 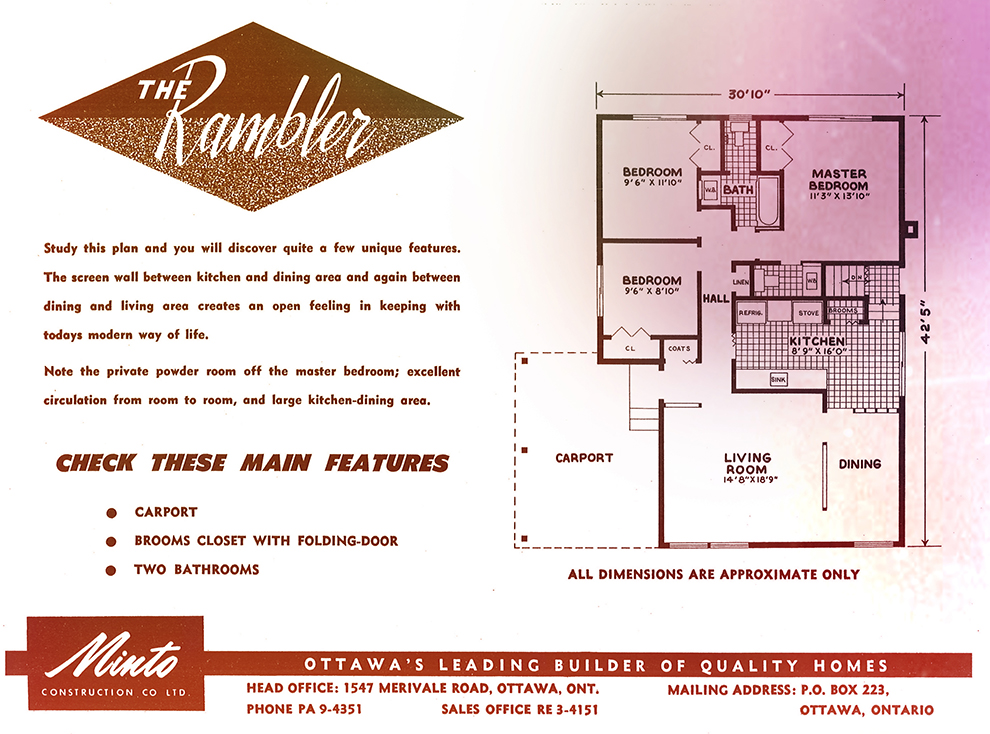 Although mid-century kitchens were typically small and walled-in, some Minto homes were designed in ways that opened this space to the rest of the house. Pass-through openings to the dining room or family room, sometimes with closable doors, were a move toward fully opening the space. Likewise, the Rambler plan in Hawthorne Meadows has a fairly open kitchen with a screen wall between the eating area and the dining room, yet the workspace is still tucked away from view. Large windows, sometimes more than one, were used as another way to make these homes feel more open. In mid-century bungalows, it is common for the basement stairs to be adjacent to the kitchen with direct access to the back or side yard. On occasion, the staircase is completely exposed to the kitchen, making the room feel visually larger. 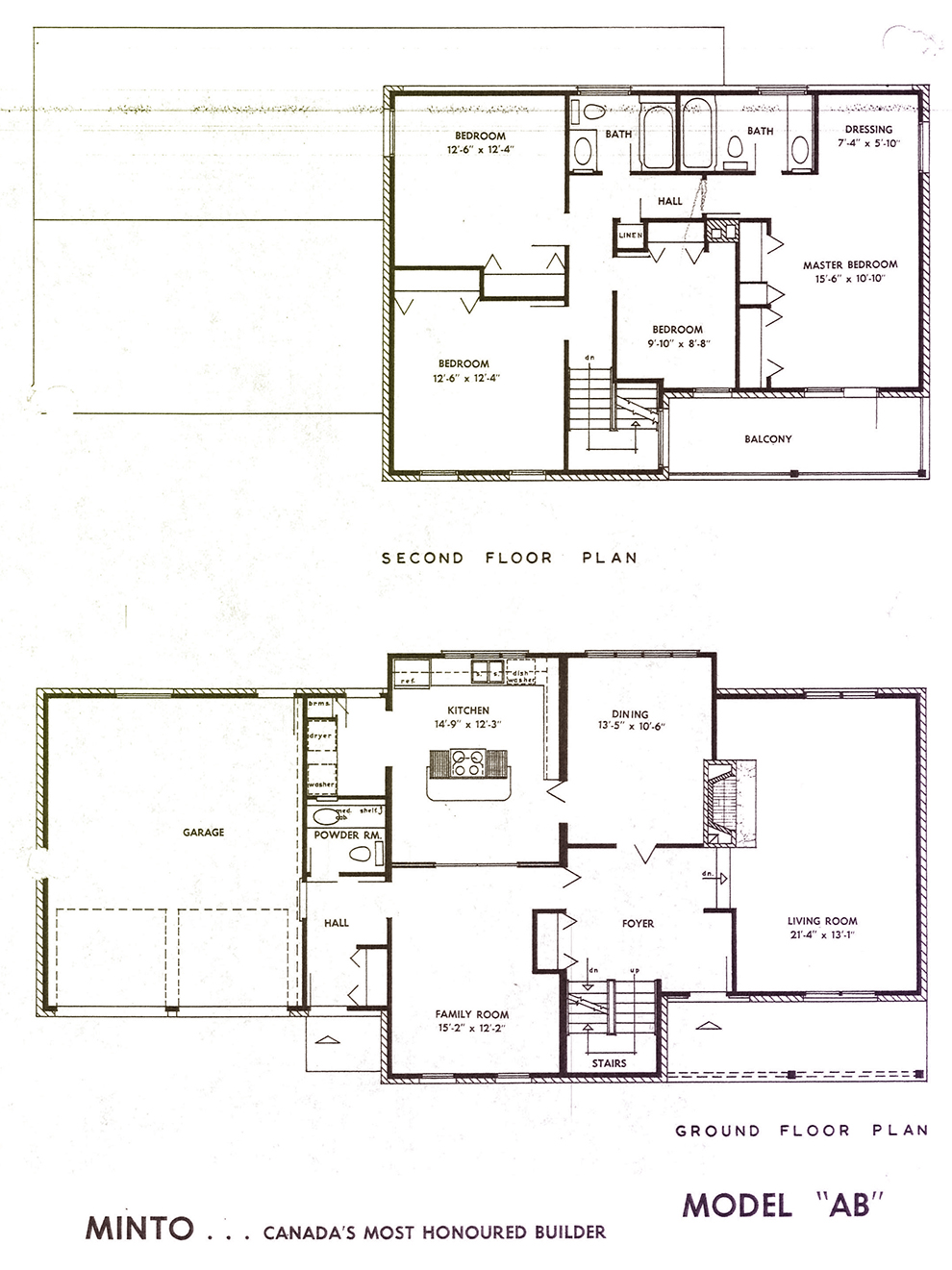 A few of Minto’s 1960s semi-detached designs were trendsetters, opening their kitchens to the adjacent room, sometimes including a breakfast bar. Likewise, the detached Model AB/Heritage Model B is one of Minto’s largest mid-century homes and has a rarity for the time featuring an island in the kitchen. This island was designed with a built-in stove and ceramic tile counters with a breakfast bar. Very few of Minto’s designs from the time had islands — even in larger homes.

Many of the homes built during the mid-century had small and separate kitchens, but in Minto’s designs they were filled with luxurious features for the time. Minto’s kitchens continue to be luxurious and are designed for the way that families live today, making them the centre of their house plans.