Our top buzzing facts about bees

There’s a lot of buzz around our honey bees and their dwindling numbers. Bees are an important (if not the most important) part of our ecosystem – the heroes of our planet. These pollinators are responsible for producing 75% of all the food we consume including fruits, vegetables, nuts and herbs. Read on to get the lowdown on one of the most fascinating (and seriously misunderstood) insects out there.

Bees play a part in every aspect of the ecosystem 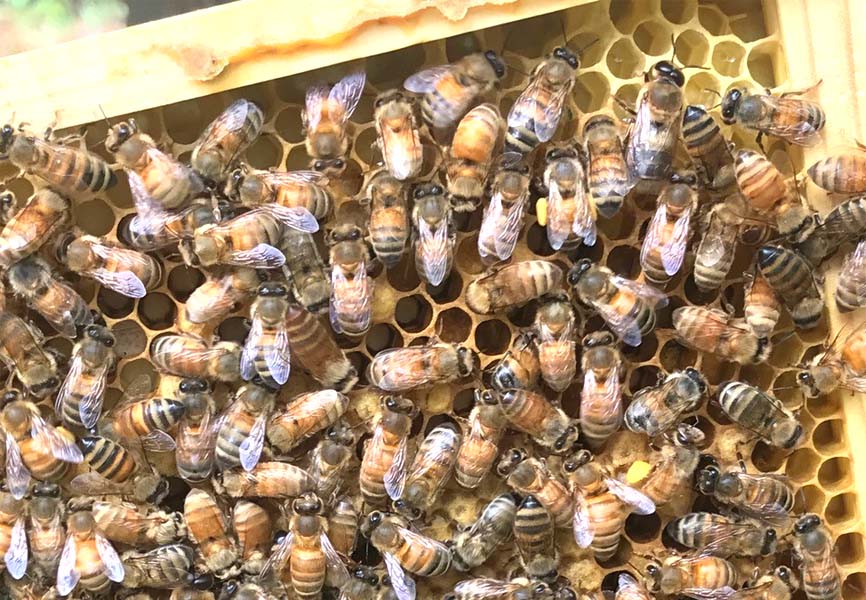 Let’s "bee" honest, when we see a bee, our initial instinct is to run. They sting, it hurts, we totally get it. But did you know that bees generally mind their own buzz-ness and only sting when they feel threatened? While they play many roles in our ecosystem (every part, in fact), an aggressor isn't one of them.

In addition to supporting the growth of trees, flowers, and other plants, they contribute to complex, interconnected ecosystems allowing a diverse number of different species to co-exist! So, what exactly is the role of our busy honey bees?

• Bees are pollinators: It takes more than soil, water and sunshine for flowers to bloom. At least 30% of the world’s crops and 90% of all plants require cross-pollination to thrive, and bees play a critical role in the process. They transfer grains of pollen from one plant to another to help them grow, breed, and produce food.

• Bees make honey: Humans have been harvesting honey for thousands of years and use it for many purposes, like snacking and healing wounds (it’s true!). Many critters like birds, raccoons, and insects will climb the highest of trees just to get a small taste of honey. If you love honey as much as we do, check out this website for simple (yet delicious) recipes.

• Bees are a food source: Bees are part of the food chain. Insects like dragonflies, praying mantises, and at least 24 species of birds eat bees.

• Bees are our farmer’s friends: Farmers rely on the diversity of bees to pollinate their produce. Bees pollinate farmer's vegetables and fruits that are then collected and delivered to grocery stores for us to munch on.

Did you know that honey is one of the safest foods? Most harmful bacteria can't live in honey for any length of time! 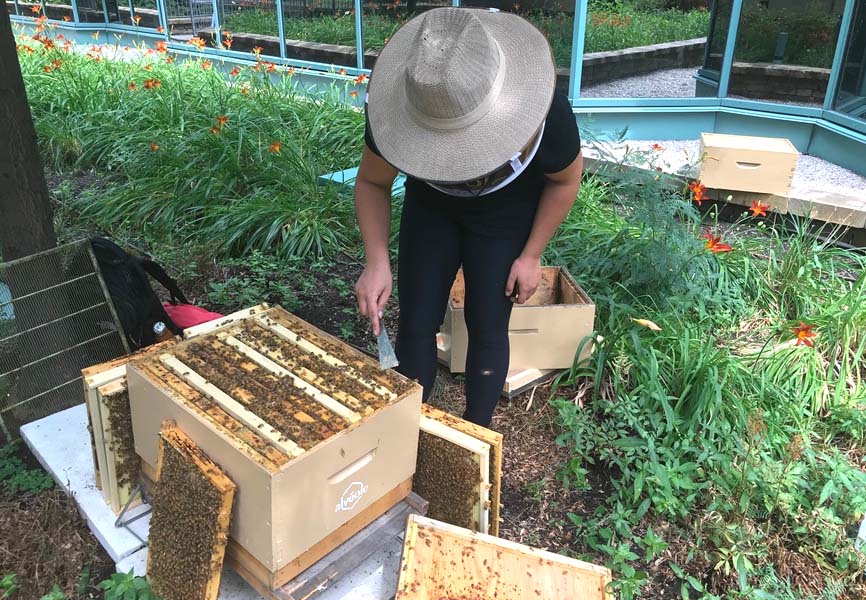 Honey bees seem to be the ‘spoke animal’ for pollination, but did you know that they aren’t actually native to Canada? According to Ontario Honey, early settlers to North America had a limited and expensive source of sugar, so honey bees were imported from Europe to establish hives here.

• In the 1600’s, honey bees were imported from England to Virginia for honey production, which soon spread to Canada.

• Honey bees brought from the United States to Canada in the 1980’s were infected with a virus and caused a loss of nearly 200,000 colonies.

Did you know that one worker bee makes 1/8th of a teaspoon of honey in its entire life, and lives an average life of six weeks during the working season? Think about how many honey bees it must take to fill a honey jar!

The bee population is in decline 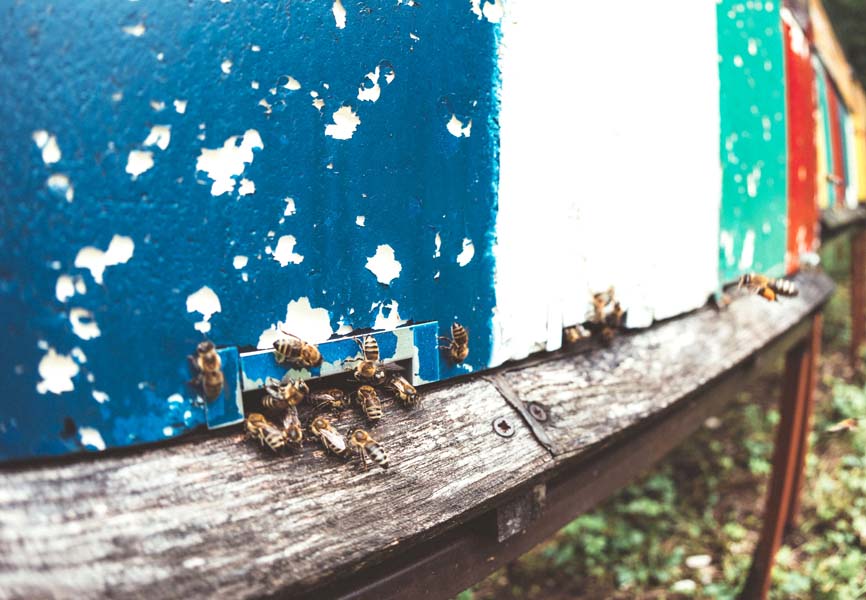 There are more than 800 species of native bees in Canada and most are solitary and live in hollow stems or the ground rather than hives. Sadly, the bee population is in decline. This is due to a couple of things:

• Neonicotinoids – or ‘neonics’ (one of the most popular insecticides in the world), is a main contributor to the decline of bees. It's a solution that gets sprayed on top of crop seeds, that absorbs and spreads throughout the plant. Neonics harm the honey bees greatly, with some hives losing up to 65% of their colonies because of the harmful chemical. Thankfully, the Canadian government is phasing out neonicotinoids starting in 2021.

o It’s causing temperatures to rise. Flowers are blooming earlier in the spring causing a potential mismatch in seasonal timing between flowers and bees. A mismatch of only 6 days is enough to harm the bees, making them less likely to reproduce.

o It’s causing bees to be vulnerable to parasites. With the increase in temperatures, bees are affected by various diseases that cause them to have shorter lifespans and their colonies to collapse.

Did you know it takes one colony of honey bees (around 30,000 bees) to pollinate an acre of fruit trees?

What we can do, bee-cause we care 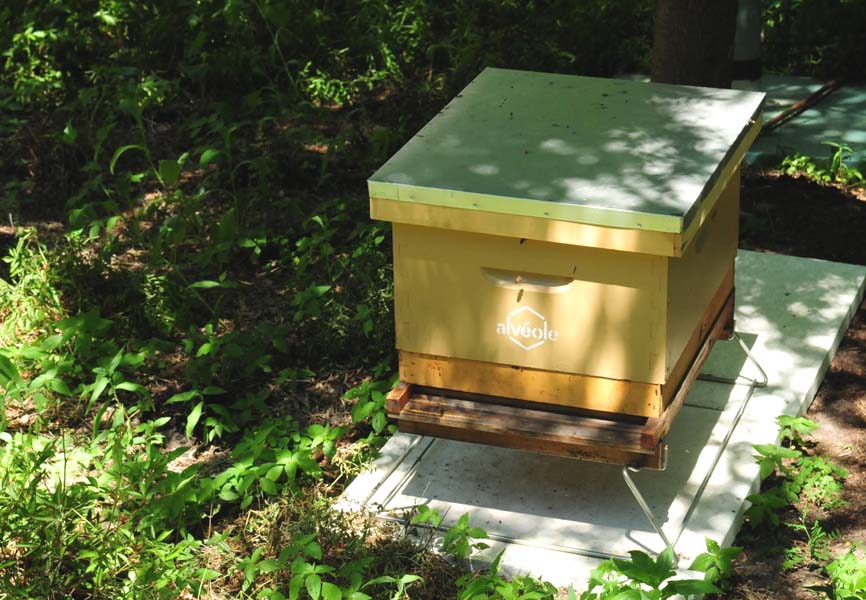 Many organizations (like Minto Group) are partnering with expert bee keeping companies like Alveole and Gee Bees Honey Company to keep the bee population growing – and you can, too!

Here are 5 ways you can help save the bees:

1. Invest in urban hives – Companies like Alveole and Gee Bees Honey Company install urban hives at your home, business, or school and will teach you to be an expert (urban) bee-keeper. An added perk? They’ll extract and package the honey your bees collect for you to take home – yum!

2. Keep a part of your garden wild – Live life on the wild side by leaving sticks, wood and leaves on the ground in your garden. Bees love to nest in the ground and in sticks and dead wood. Fun fact - they actually spend the winter months protecting themselves from the cold by hiding in the leaves left on the ground from the fall – a process called overwintering.

3. Bring all the bees to your yard – Be(e) friendly by planting these flowers in your garden that pollinators (bees, hummingbirds, and butterflies) will enjoy.

4. Stay away from pesticides or herbicides – Learn to love dandelions or find an organic solution. Though dandelions can be pesky flowers, they're the first source of pollen that winter-hungry bees receive. Pull the weed after the flowers have fully bloomed – and remember that acres of wild flowers aren’t going to help the bees if they’re treated with bee-killing pesticides.

o Friends of the Earth

Did you know that it requires 556 worker bees to gather a pound of honey? Give that some thought the next time you dip your finger into a delicious jar of honey and you’ll understand the importance of keeping these tiny creatures thriving.

Make sure to send us a Tweet or Facebook message to let us know what you’re going to help save the bees with #LiveBetter10!