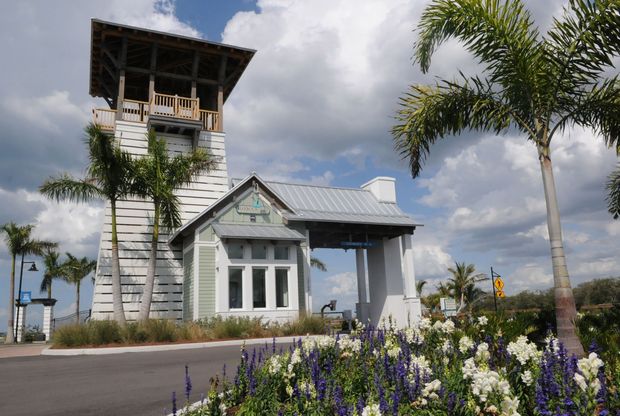 The entrance to Harbour Isle on Anna Maria Sound, a new Minto community under development at
State Road 64 West at the Anna Maria Bridge. GRANT JEFFERIES/Bradenton Herald
By Josh Salman on Mar 9, 2012

ANNA MARIA SOUND -- When Linda Pfaff was ready to pull the trigger on a retirement pad in Florida, she knew just the place.

With relatives living in Clearwater and Bradenton, the Ohio native had enjoyed many weekends basking on Anna Maria Island. It’s the only area she would consider.

Now the cardiac technician spends her winters on one of the last developable private islands in Florida, with a villa that overlooks protected preserves and her beloved Anna Maria Sound.

Soon she’ll have about 680 new neighbors.

Pfaff was among the first handful of buyers to move into Harbour Isle -- a massive planned community stretching nearly 200 acres on Perico Island off State Road 64 just east of the Anna Maria Island bridge.

“I have to go back to Ohio in April, and I’m pretty depressed,” Pfaff said. “This really has everything I was looking for.”

The launch of the long-awaited and somewhat controversial Minto Communities development on Perico Island is well under way.

A dozen homes are complete and another 12 are in some phase of construction at the gated, waterfront community planned to eventually house 686 units.

Phase one of the project, which has been under construction since early last year, will build 96 Key West-style luxury condos, each grouped three to a building, surrounding a lake along the island’s east side.

The Canadian-based developer has completed amenities for its inaugural buyers that include a resort-style pool, cabanas, a kayak launch and hiking trails.

During a private tour of the community Thursday, project officials said the progress is a sign the real estate market is on the upswing and buyers are once again turning to new construction.

“We’re seeing really good sales, so we’re pushing up the release of future phases as well as the construction schedule to accommodate demand,” said Bob Stevens, director of sales in West and Central Florida for Minto Communities. “We’re focused on building momentum for the community.”

The builder has sold five units, with two more to close this month. The company expects to sell at a pace of about four units a month through September, while starting construction on two new buildings each month.

The first phase is projected to be complete within two years.

Most of the initial buyers have come from out of state and are between 40 to 60 years old, Stevens said.

They scale up to $473,900 for the Harbour Grand Retreat -- the king model with nearly 3,000 square feet of living space under three stories including three bedrooms, an elevator, observatory with views of the Sunshine Skyway and balconies overlooking the marsh.

“I think people really get the vision,” Stevens said. “They understand what we’re trying to do.”

Development on the island had been a point of concern for years from environmentalists who wanted to preserve the property’s natural character.

A citizens group filed a lawsuit against the state over the density and height approved for the original project, which was then owned by St. Joe, a paper company with a poor reputation for how it treated the environment.

St. Joe stopped the development in its early stages in 2007 when the market began spiraling downward. In 2009, Minto purchased the land for $8 million and the marina site for another $2 million, according to the deed’s documentary stamps.

To ease some of those previous concerns, Minto decided to design all of its units under LEED certification, which designates them as environmentally friendly buildings.

Those efforts also will save the average homeowner about 20 percent in energy costs, Project Manager Mike Johns said.

“We’re the only LEED-certified builder I know of in this area, which means we’re above what meets the energy efficient codes,” Johns said. “It’s a special client that comes here looking for something just like this.