Ottawa, ON (April 4, 2016) – The Minto Group is proud to announce that its Minto Place complex has achieved LEED® Canada for Existing Buildings: Operations and Maintenance (LEED EB) Silver Certification, as recognized by the Canada Green Building Council. Built in 1988, Minto Place spans a city block, extending west from Kent Street to Lyon Street and south from Slater Street to Laurier Avenue. The unique mixed-use complex includes four towers: three commercial and one residential (Minto one80five – a premium rental and furnished suite offering), joined by a retail podium, making it the first of its kind to achieve this certification.

Research indicates that green offices boost job satisfaction, productivity and performance and are a powerful recruitment and retention tool. LEED buildings cost less to operate and can reduce energy and water bills by as much as 40 per cent.

Ideally-located along the public transit way and major bike paths, a recent survey found that 77 per cent of those living and working at Minto Place commute to work by bike, public transit or foot. From an e-waste initiative to a compost program in the podium food court, residents and tenants are empowered to lessen their impact on the environment.

Energy conservation measures within the complex include:

About Minto
The Minto Group is a family-owned, fully integrated home builder, construction and property management company with operations in Ontario, Alberta and Florida. Since 1955, The Minto Group has created better places to live, work and play. It has built more than 80,000 new homes, manages more than 17,000 residential rental homes and apartments, and carries a commercial portfolio of more than 2.5 million square feet of office and retail space. In addition to these holdings, the company owns and operates Canada’s largest portfolio of executive furnished suites. 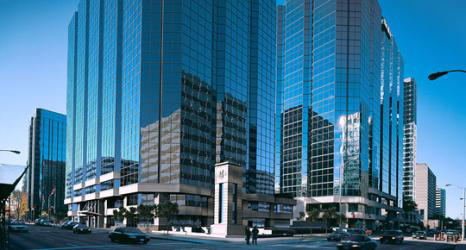