Minto has always been one of the vanguards of modern design in the city, but there is one plan that stands out as their most striking mid-century modern offering. These unique flat-roofed semi-detached bungalows with floor-to-ceiling windows and carports are notable in a sea of detached houses with peaked roof lines. These designs were built in the late 1960s in the Crystal Beach and Parkwood Hills areas, and are scattered in a seemingly random way throughout both neighbourhoods, with only 32 pairs built. 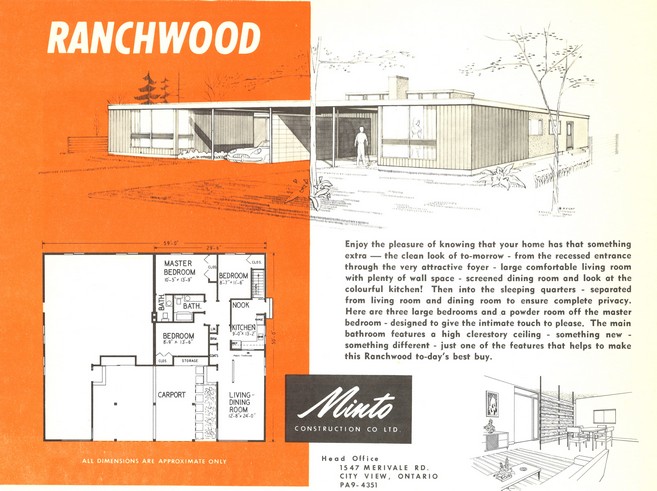 Minto constructed many mid-century modern style houses from the 1950s to the 1970s, but this is one of the more daringly modern designs built by a large builder in the city. The Ranchwood appears to have been inspired by mid-century modern flat-roofed houses in California, which were popular at the time. In fact, flat roofed houses with large windows have even earlier roots in the early 20th century European designs of the modern architecture movement and masters like Le Corbusier and Mies van der Rohe (designer of the Westmount Square complex in Montreal and TD Centre towers in Toronto).

The layout of the Ranchwood is just as unique as the façade with the main entry to the house through a carport/courtyard that is lit from an opening in the roof. At the front of the house is a living space filled with light from walls of glass that reach from ceiling to floor. A wood screen originally separated the front entry from the dining room, leaving one to wonder how many of these still exist? Innovative high windows in rooftop pop-outs allow light into the bathrooms in the centre of the house. The ensuite bathroom off the master bedroom would have been considered a luxury at the time, especially in a semi-detached house.

With time, many of these houses have been adapted, either by adding skylights over the roof opening in the carport or by altering the style of the façade. This would suggest that the houses have met the needs of the owners, as they have chosen to stay and make alterations, instead of moving to a new house. One thing is for sure — Minto left its architectural mark on the city with these striking modern houses. The next time you are in Parkwood Hills or Crystal Beach keep an eye out for them!

Minto continues to build homes that push the envelope of modern design in Ottawa. Take a virtual tour or visit the Show Homes in communities across the city to see for yourself.