During the 1980s two major changes started to impact the way that suburban homes were designed. The first was that families started to own more cars than before, so having a two-car garage became more desirable than ever. Secondly, builders began to build homes on increasingly narrower lots compared to earlier years. With these two changes combined, slender homes started to appear with large garages protruding out front, a feature found most notably in Minto’s Hampton/Stanford design. For the first time in history, instead of the front door, the garage became the first thing a person saw when approaching these homes. 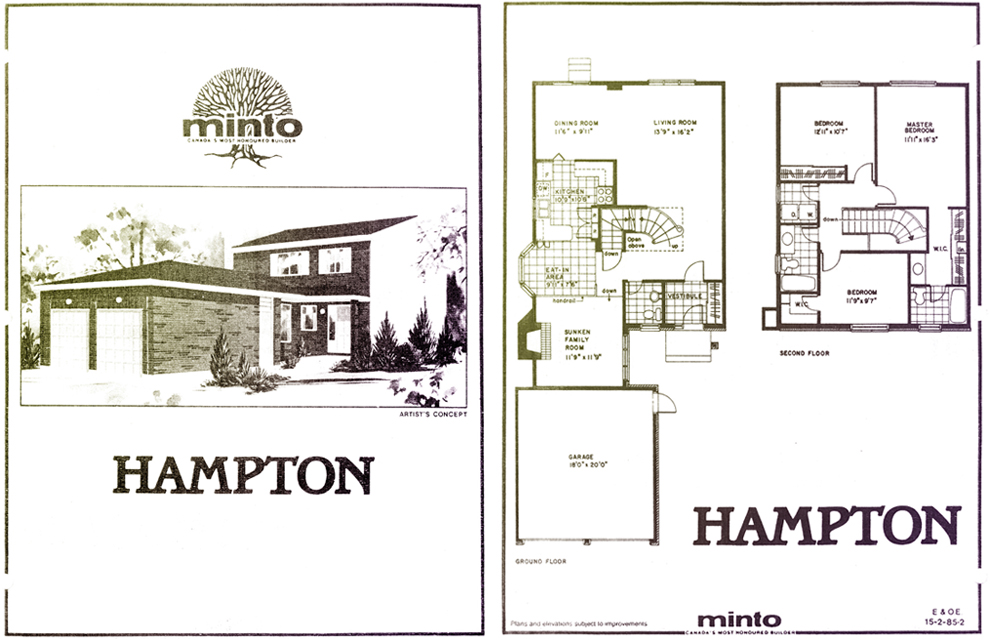 Beginning in the early 1990s, Minto introduced a new series of homes to Ottawa that differed from what was built before, and was an alternate to homes with protruding garages. Instead, the Contempos New Style Singles were built with the garage pulled to the side of the house, allowing for large main-floor windows on the front. The architecture of these homes took inspiration from historic homes with bay windows, brick and wood accents, shutters, and dormer windows. The streetscapes were conceived as having a “village” atmosphere. 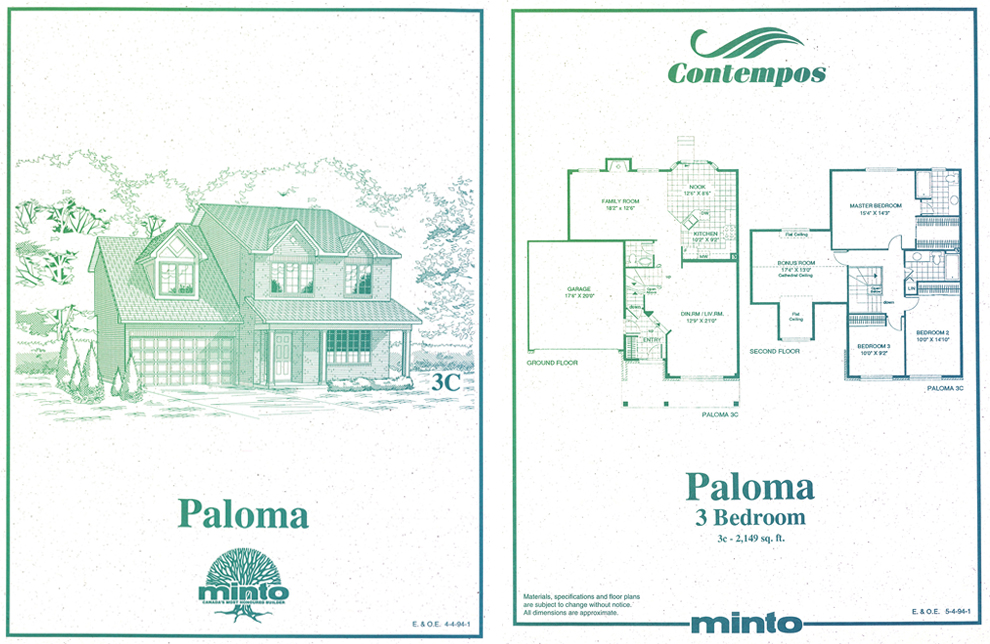 These new footprints with a garage at the side allowed for homes to be built closer to the road, meaning the parcels of land each house was built on could be shallower than they were in the past. Streets were built narrower, thus passing cost savings on to the new home buyers. Moreover, the homes were also built closer to each other than before, and, except for homes on corner lots, they did not have windows on their sides. Unlike in the past, many dining rooms do not have windows, but are still bright and open to living rooms that let in plenty of light through large windows. Similarly, many of the kitchens are windowless, but are completely open to the eating area and family room with windows, and a sliding door across the back of the house.

Even though two-car garages were common at the time, the smallest and narrowest Contempos plans only have a one-car garage. This made it possible to still have a large main floor front window on these designs, and front porches that span the width of the house.  The result is a streetscape that is welcoming. On larger models with two-car garages to the side, there was the option to add a bonus room above — a unique upgrade that was not offered in pervious Minto designs.

All but the smallest of the Contempos plans have the formal living and dining rooms at the front, a layout inspired by historic urban houses. While older homes typically have a separation between these rooms, either doors or an archway, these plans have no separation and presents one large formal room. Gone, too, is the hallway common in older homes. One must pass through the large formal room to access the rest of the house and staircase. At the back of these plans is an area dedicated to informal living with an open-concept kitchen, eating area, and family room. The notion of “cocooning” became common during this time, where more time was spent at home watching TV and movies, so this open space became the perfect spot for families to spend hours together.

Up until the late 2000s, the Contempos series continued to be built with new designs. The Contempos Classics are some of the largest and most luxurious from the collection, and the Grand Contempos are the widest of the series with centre-hall plans, but still with the garage to the side. With time, new collections of home designs replaced the Contempos, but they have forever had a lasting impression on the way new suburban houses are designed in Ottawa, particularly in the way that garages are rarely built in front of homes.