The centre hall house plan has been around for hundreds of years, but in the 1960s and 1970s Minto made their own mark on this housing type. With roots in Canada dating back to the 18th century, the Georgian style centre hall house, in its simplest form, is symmetrical with the hallway and staircase down the middle with rooms on either side. In more recent years, the living room is typically located to one side with the dining room and kitchen on the other. In larger houses, family rooms, eating areas, laundry rooms, and powder rooms expanded this standard layout. Minto's centre hall plans ranged from more modest versions to larger designs with up to 5 bedrooms. In their Heritage Series of homes from the mid-1960s, built in locations such as Graham Park and Skyline, nearly all their designs had some variation of the centre hall plan. 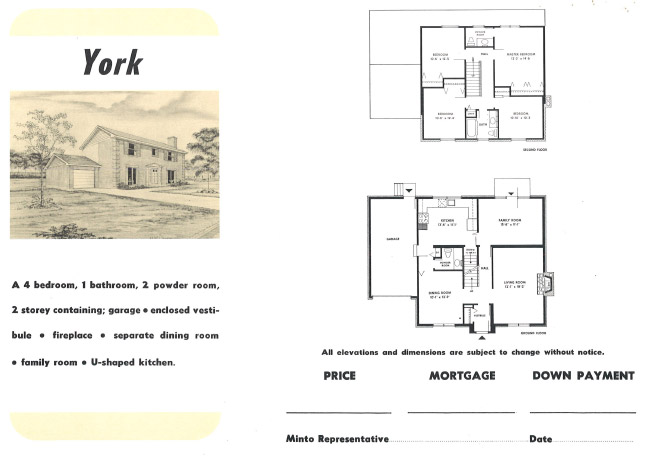 The York plan was one in a series of Minto designs that had a very similar centre hall layout. From the outside the house looks perfectly symmetrical, but inside the dining room is two feet narrower than the living room, allowing for more width in the centre hall for the staircase. The formal rooms are at the front of the main floor, with the casual family spaces across the back. Upstairs the centre hall layout continues with 2 bedrooms on each side and a bathroom at each end of the hallway. 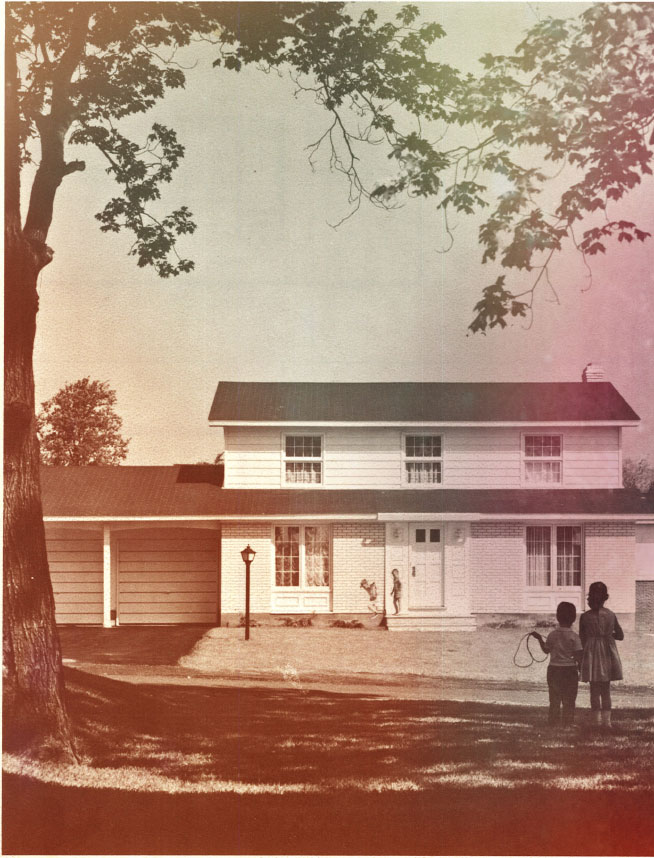 A unique characteristic of many of Minto's centre hall designs is the slight bumping out of the front door. This gives more space for a vestibule, convenient in the wintertime in Ottawa, but was not something common in the historic version of the style. Numerous Minto designs also had main floors that projected out further than the upper floor thus creating a lower roofline that visually cut the façade in half horizontally. The symmetrical façades that are a hallmark of these designs were tweaked with several of Minto's larger plans, yet they have the same basic centre hall layout.

On the exterior, centre hall designs by Minto came in a variety of styles, from more traditional versions inspired by Georgian and Federal architecture, to hybrid versions with modern elements. As one of the more traditional houses, the Laurentien plan had a veranda with two-storey pillars and second floor balcony reminiscent of Antebellum southern American architecture. On the other end of the stylistic spectrum, the Dorset playfully unsettles the traditional centre hall plan in a new way with a blank main floor façade on one side and a neo-mansard roof. Furthermore, the Lorraine design has a bumped-out vestibule that places the front door to the side and presents a blank façade in the central location normally reserved for the front door.

The heyday of centre hall designs in Minto's portfolio was during the 1960s and 1970s when lot sizes were generally wider to accommodate them. They eventually faded out by the early 2000s.