When one thinks of a mid-century modern house, an image of a side split may be conjured up (think of the Brady Bunch house). These types of houses first became popular during the post-war period and continued to be built in great numbers until the late 1980s. Minto had many different variations during this period, but there were a few key designs that took advantage of the changes in levels with daring uneven-pitched rooflines, making them modern icons of the period.

Minto's visually striking side split models included a series of very similar designs such as the Viking, Berkeley, and Belmont. These homes had the living spaces on one side and the bedrooms one half-level up on the other side, and the garage tucked underneath. Of note is the roofline that had an uneven sweeping pitch, a large picture window, and a horizontal fin that projected over the garage and front door. Inside, the main living spaces had vaulted ceilings, including a large living room with exposed ceiling beams.

Other popular Minto side split designs from the mid-century period were the Monterey and Montrose plans that were very similar in layout. These designs had sprawling façades and low-pitched rooflines that accentuated the horizontal, even though they were side splits. The low silhouettes of these houses allowed them to fit in seamlessly in the areas where they were built, as they were predominantly filled with one-level bungalows. 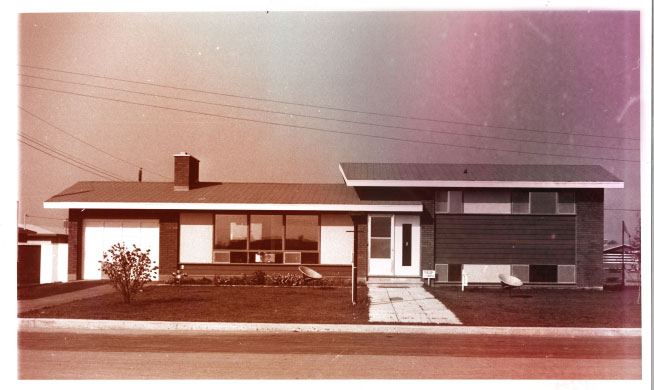 Minto's side split designs were usually variations on bungalow layouts yet with the bedrooms half a level higher than the living spaces. This added a sense of privacy to the sleeping spaces not always achievable in a one-level design. The space underneath the bedrooms could either be the location of the garage, while other designs had a family room or additional bedrooms occupying this space. This level of the house was commonly partway below grade but allowed for larger windows compared to a full basement.

Due to changing home design trends, by the end of the 1980s side split houses stopped being built by new home builders, yet they continue to be very popular on the resale market throughout Ottawa. Read more about Minto's modern home designs at Why Minto.