Everyone loves a good story. We can’t help but share them with friends and family. Whether it’s an entertaining legend, an educational anecdote or a tragic tale, stories enchant our hearts and stimulate our imaginations. And many of the homeowners in our Mahogany community will agree, with Manotick Village being a storybook town of its own.

Let’s travel back in time and learn all about the storied history of this charming district in Ottawa. 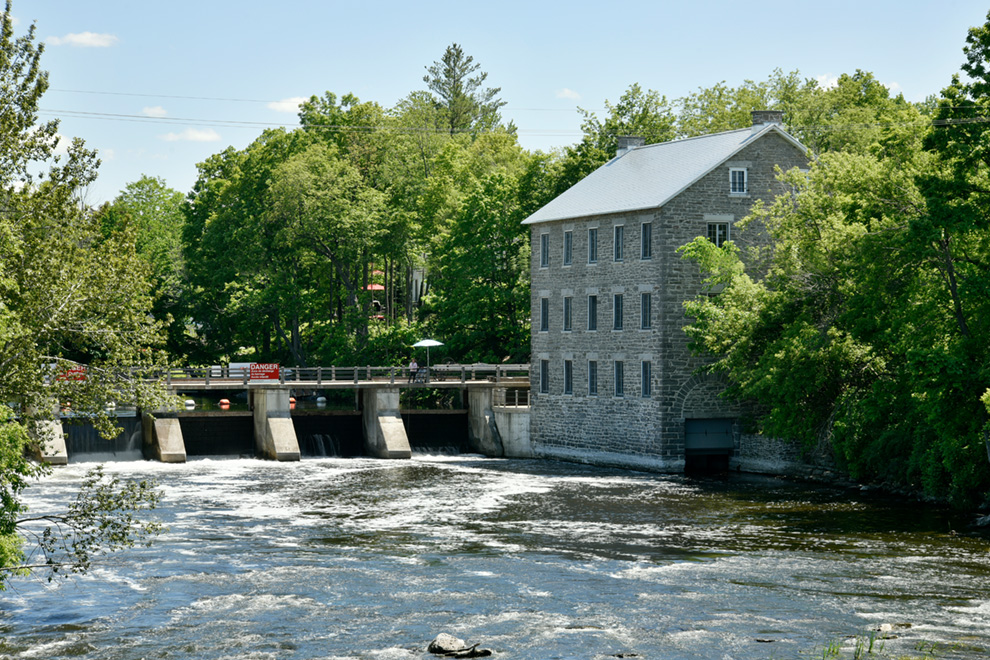 A trip along the Rideau River

The story of Manotick began over 160-years ago during the development of the Rideau Canal. As lockstations were established, the heads of water created became popular locations for mills. The locks also provided the ideal docking areas for boats, with bridges spanning across the river to facilitate travel and movement of goods from one side to the other. And where mills and bridges were built, people soon followed.

Such is the case after the completion of the lockstation at Long Island in 1850. This site in particular captured the attention of two prominent businessmen at the time, Moss Kent Dickinson and Joseph Currier. The pair formed a partnership to acquire the water rights at the lock and began cultivating the region for their ventures.

First, the pair bought approximately 30 acres of land from several farmers in the area, knowing new businesses would need land to build on, and their employees would need homes to live in. Dickinson and Currier also purchased an idle gristmill nearby with the intent of putting it back into service. 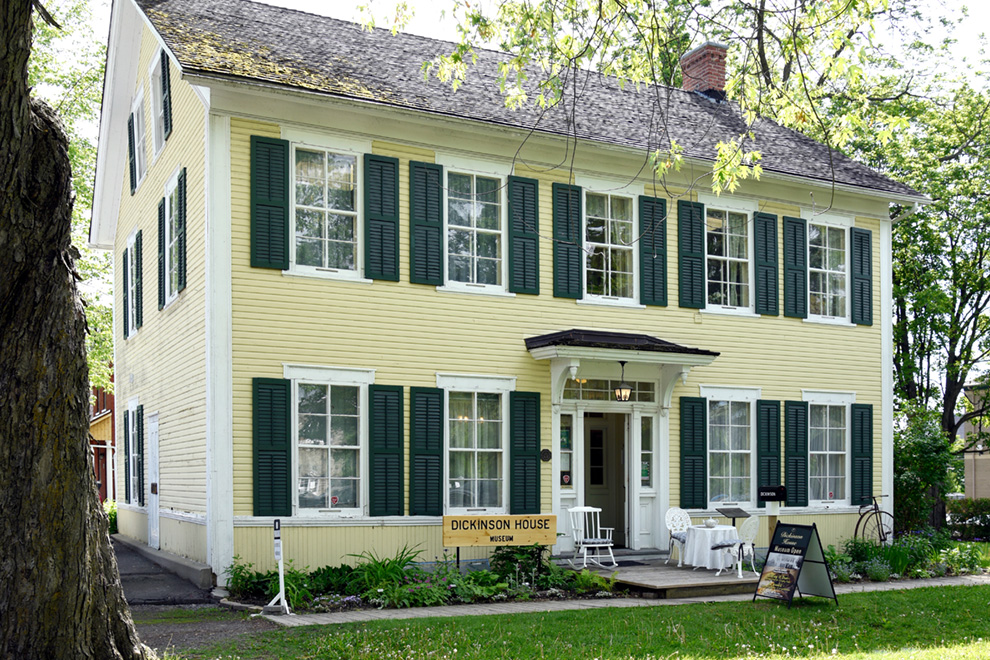 The region expanded, and by 1858, it was time to give the settlement a name. As the story goes, Dickinson chose a name inspired by the Ojibwe term for “island in the river.” However, some argue the name most likely stems from the Algonquin word “minitig,” meaning “island,” with the assumption its pronunciation was altered to Manotick.

Along with founding Manotick, Moss Kent Dickinson also served as the Mayor of Ottawa between 1864–1866. His former home is now a museum where his history is on display.

As planned, the two founders had the gristmill up and running in 1860, which was (and still is) the centrepiece of Manotick Village. A sawmill and card mill followed shortly after – both of which were later destroyed in a fire and never rebuilt.

20-years later, Manotick had become a bustling little village with a population of 400 people and nearly 100 residences. It was home to one school, three churches and several businesses, including five general stores, five blacksmith shops, four wagon shops, a drug store and a variety of other shops.

Flashforward to the 1980s, Manotick Village boomed with residential development, and later on in 2000, it was amalgamated into the City of Ottawa. Today, this quaint little village is a sought-after place to call home, offering the best of rural and urban life complemented by historic buildings, small-town charm and friendly residents.

Although some claim there’s a ghost living in Manotick, too… 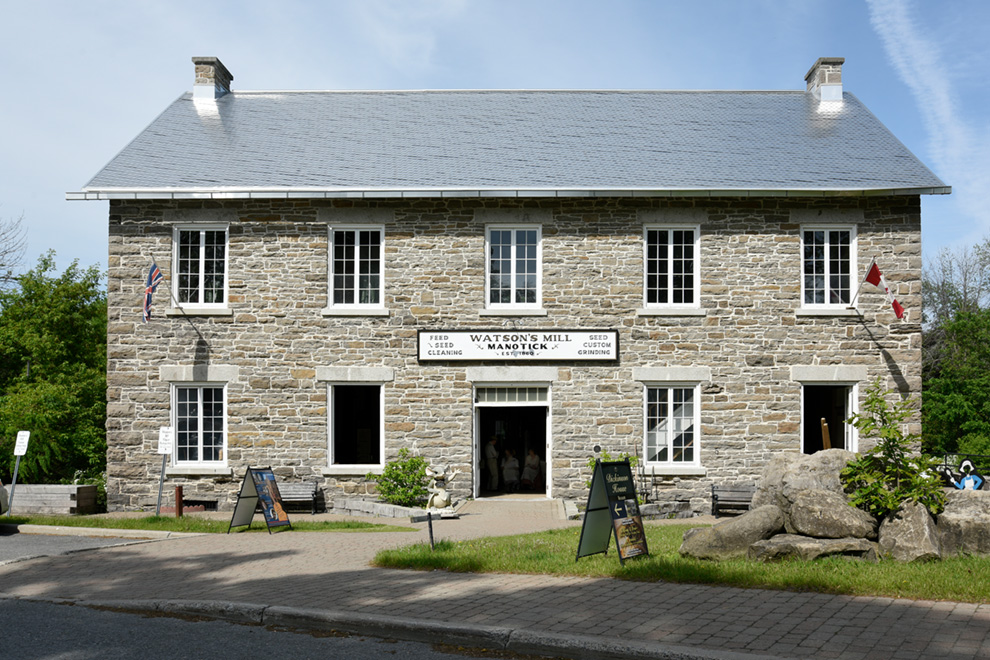 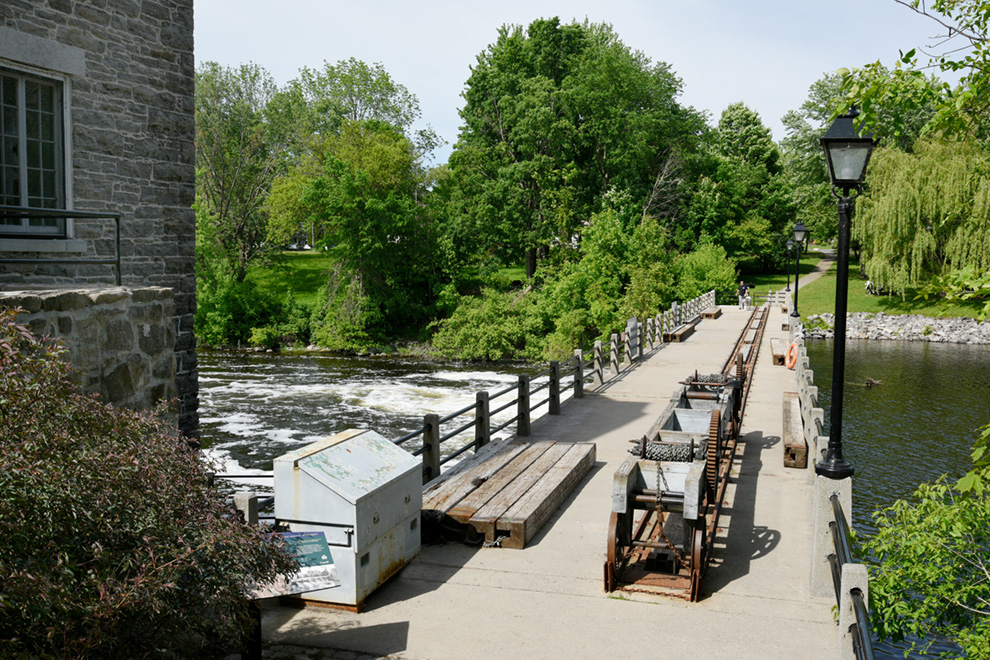 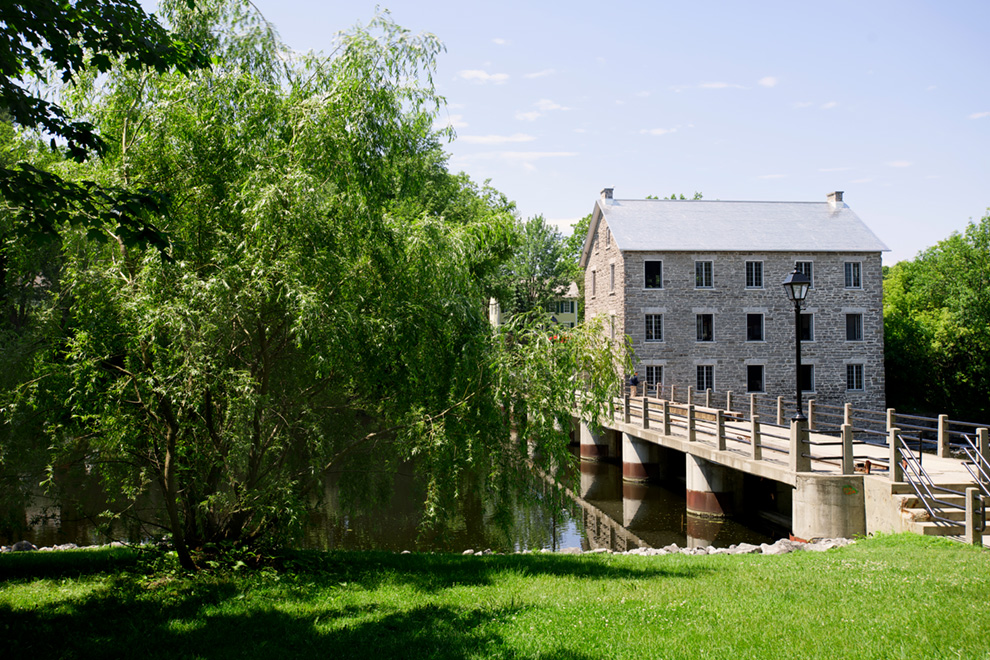 The haunted history of Waton’s Mill

There’s another story to be told about Manotick Village. One telling of tragedy and a ghost creeping within the walls of Watson’s Mill. The ghost’s name is Ann Crosby, and she was Joseph Currier’s wife. In 1861, with the gristmill running smoothly and businesses starting to set up shop, Currier and Manotick Village had begun to prosper. He was happily married to a beautiful woman, his home was well established and the mill was approaching its first annual milestone. To celebrate the achievement, Dickinson and Currier decided to host a gala, leading tours through the mill and showing off its inner workings.

Crosby, wearing a long, flowing gown was touring alongside her husband when a freak accident occurred. Her dress got caught on the shaft of a spinning turbine and she was thrown against a stone pillar. She did not survive the impact.

Currier was devastated by the loss of his love. And soon after her death, he sold all his shares to Dickinson and left Manotick Village forever.

But the spirit of Ann Crosby remained.

Over the years, many residents have reported seeing a beautiful woman in a long gown peering out a window of the mill at night. Visitors even claim to feel an eerie coldness in certain corners of the room on the second floor. Moreover, paranormal experts have examined the mill and believe there’s an abundance of spectral energy inside – along with the spirit of Crosby, investigators suggest at least eight more entities haunt the mill.

There’s no need to be frightened though. Whether you believe in ghost stories or not, there’s no evidence of malicious behaviour from the spirits residing in Waton’s Mill. And precautions are in place to prevent another tragic accident.

Today, the mill is a popular attraction as a museum and historical centre highlighting Manotick’s heritage. It’s been restored with original machinery and is the only working heritage site in Ontario. In fact, you can purchase stone ground flour from the mill – Miller’s Oven Tea Room and Cafe, a non-profit restaurant nearby, even bakes their bread using the milled flour!

Before being sold to the Rideau Valley Conservation Authority in 1972, Watson’s Mill was last owned by Harry Watson – this is how it came by its current name.

If you’re interested in learning more about the story of Watson’s Mill, tours led by period-costumed guides are offered on site; virtual tours are also available on the mill’s website. You can rent the facility, too, with school programs and youth summer camps taking place as well. 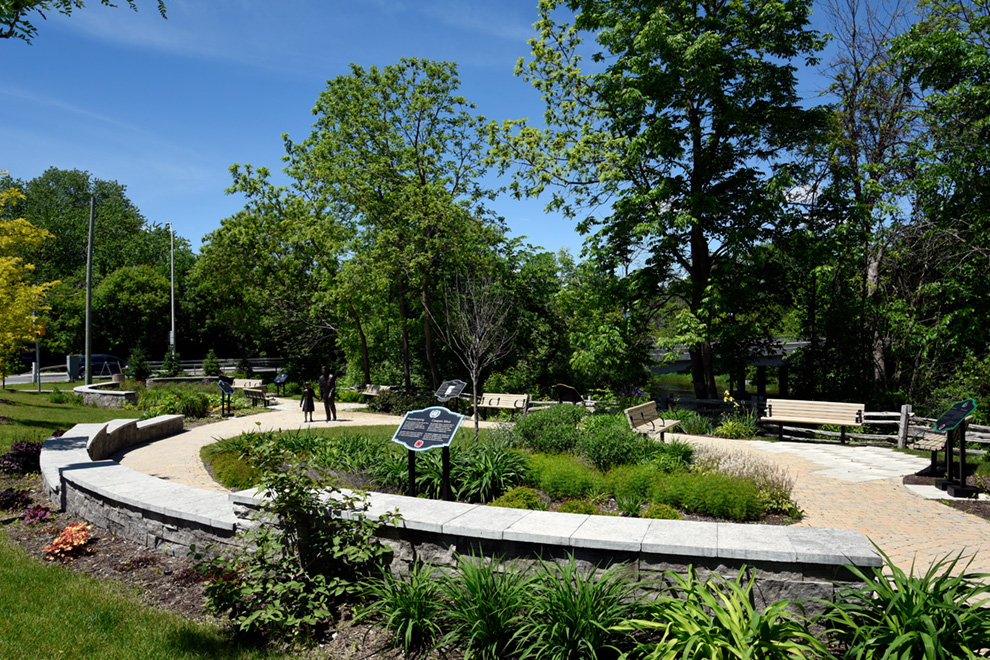 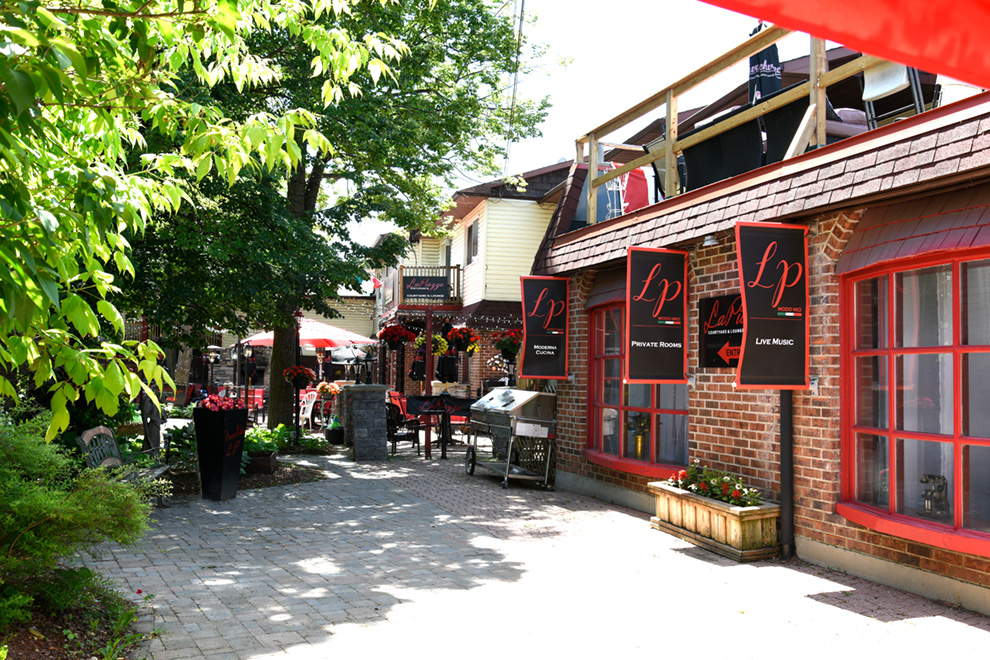 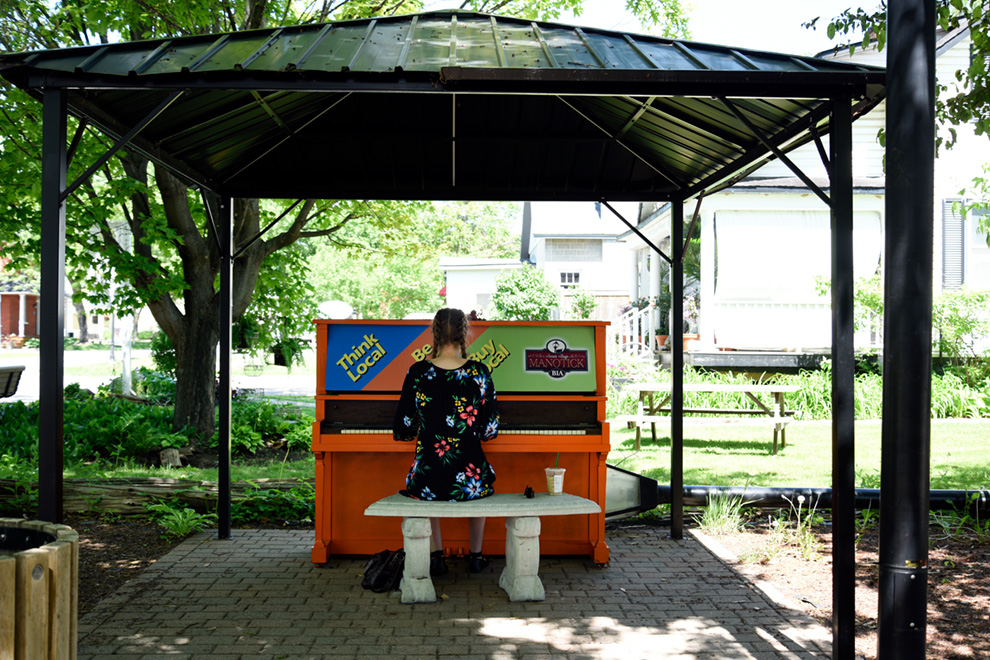 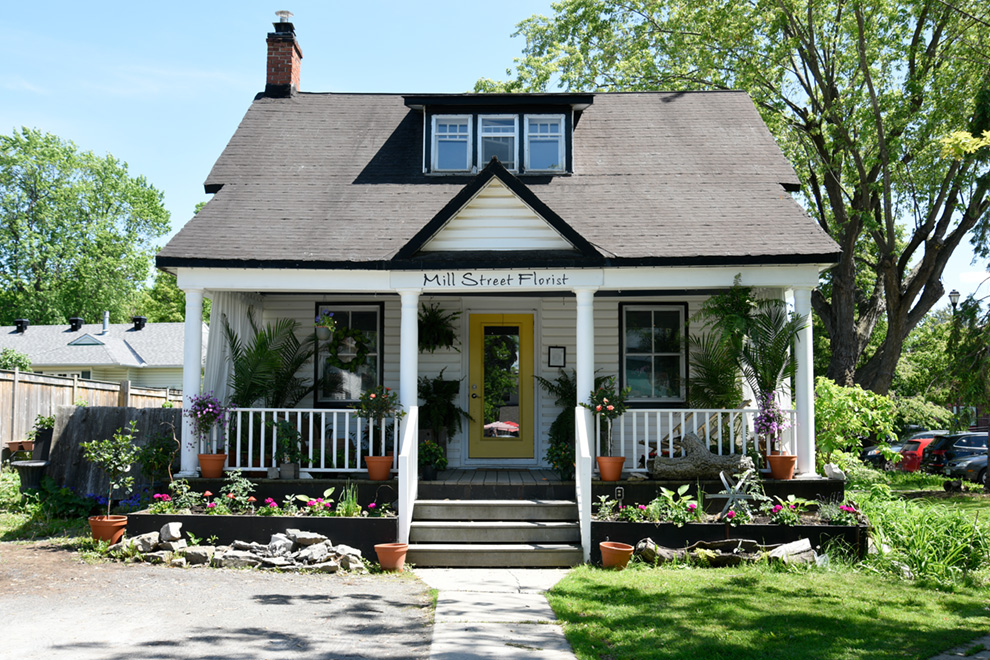 You’re invited to become part of the history of Manotick Village. Come walk its winding lanes, visit the local shops, and tour the historic buildings. Take part in unique events, like Dickinson Days where locals celebrate the past, and go exploring at one of the nearby parks. This includes A.Y. Jackson Park – named after the Group of Seven painter who lived and painted in Manotick from 1957–1962 – and David Bartlett Park, offering 35-acres of green space on the north end of Long Island. 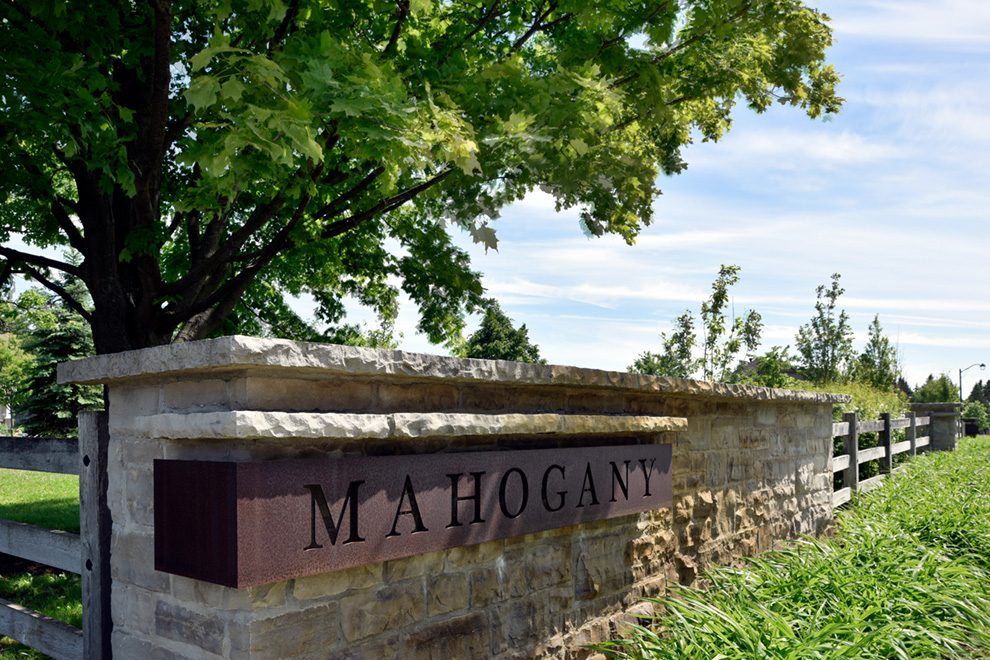 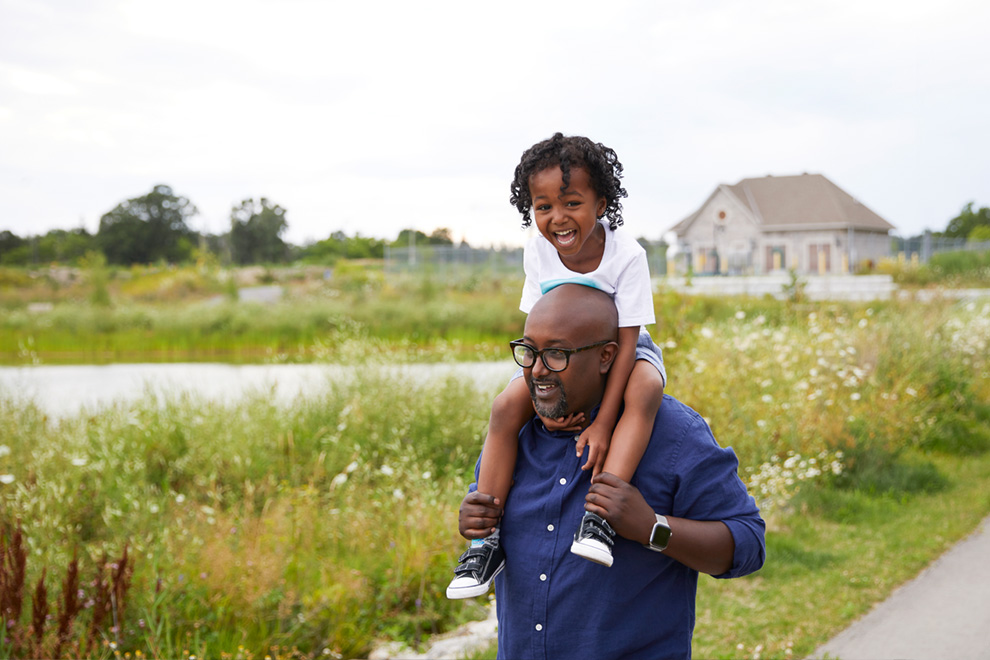 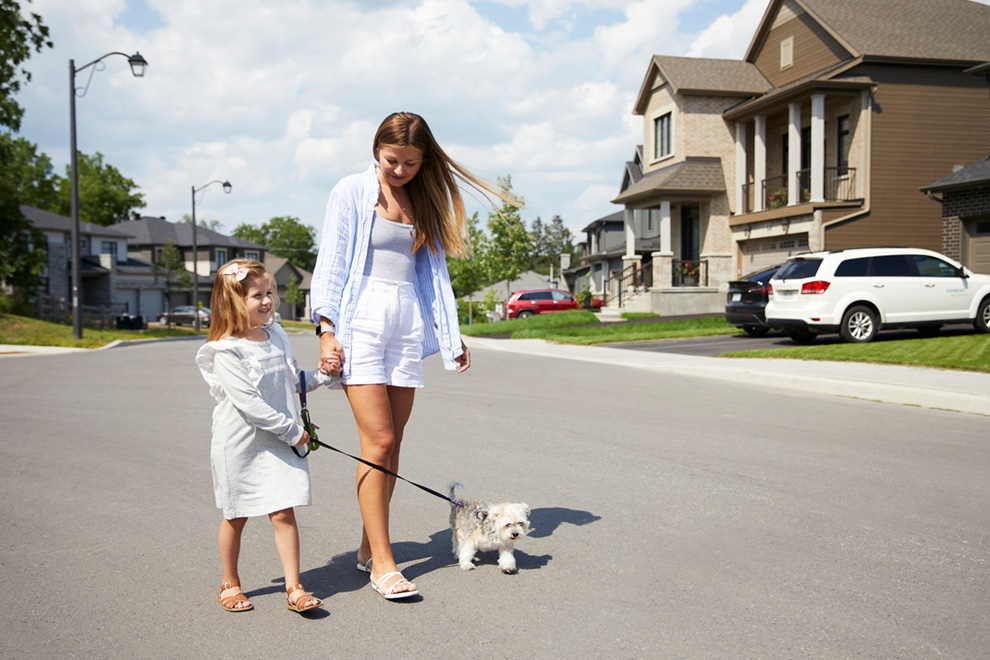 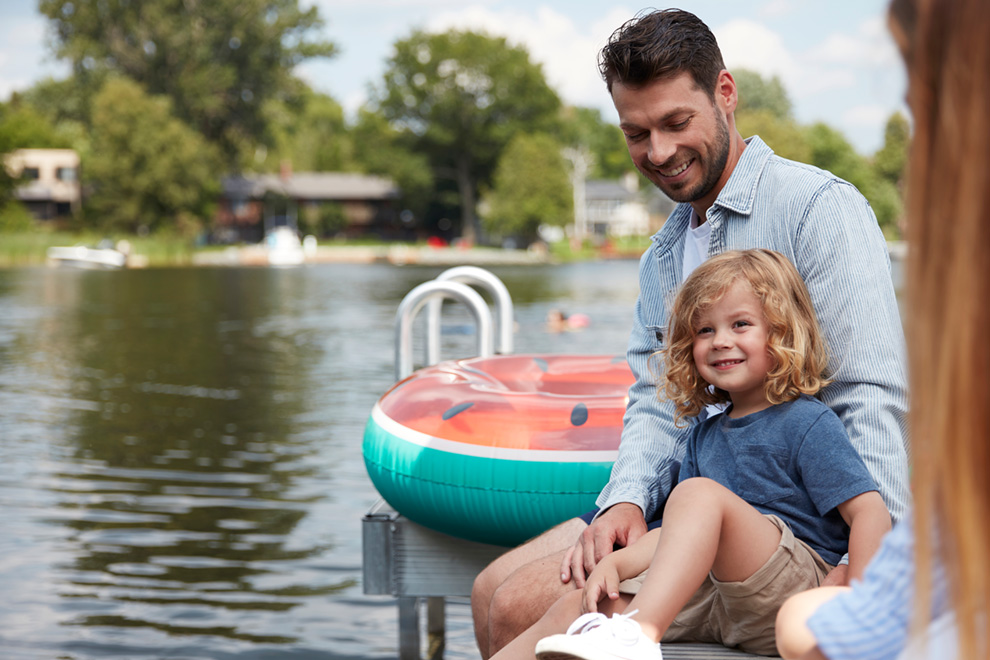 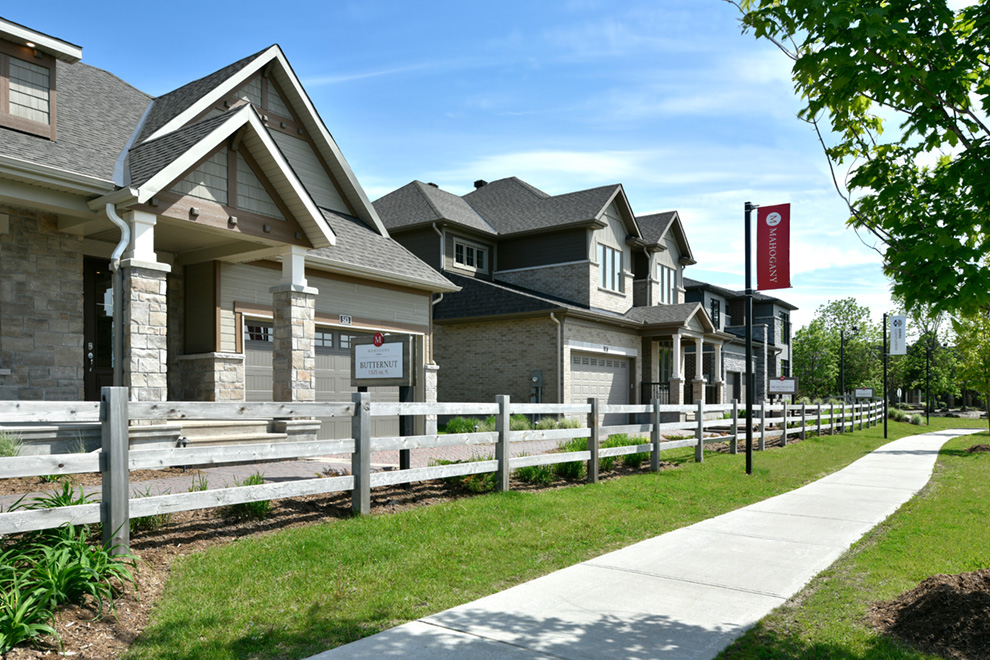 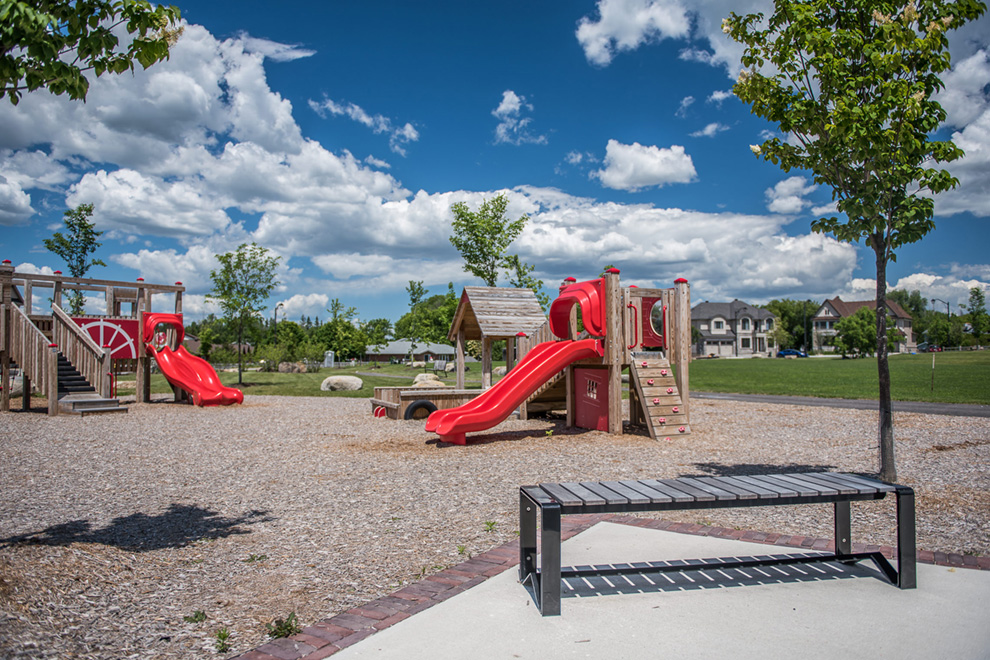 Previous Next
If you’re searching for a home in Manotick, look no further than our esteemed community of Mahogany. It’s only steps away and reflects the historic charm of Manotick Village. Discover a neighbourhood that offers you more, with:
Discover beautiful streetscapes with stunning home designs built on oversized lots. This includes our premium collection of Single Family Homes, Bungalows, and Bungalow Townhomes exclusive to Mahogany.

And Mahogany is growing, with the newest phase bringing more to a community already offering so much. To learn about what’s featured in Phase 3, check out this article.

Discover what life is like in Mahogany by touring the 5 unique Model Homes within the community. Visit the Sales Centre at 108 Moretto Court to arrange your in-person viewing, or explore our Model Homes online and take a virtual tour today.

Modern, established living awaits in Mahogany. To become part of the story of this charming community, sign up to receive the latest sales updates.

Selecting the right school for your child is an important decision, and there are a number of great school options available to residents of Mahogany.