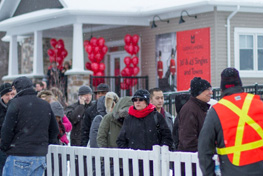 Home buyers camp out for chance to live in Queensville

Homebuyers camp out for chance to live in Queensville 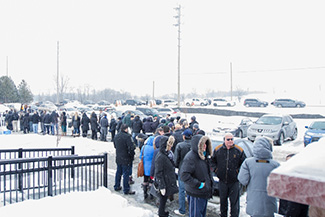 Darren Gumbs knows buying a new house isn’t as simple as showing up at a sales office, pointing at what you want and telling the salesperson you’ll take it.

There is huge competition to be first in line to get the best deals. The Mississauga resident had his eyes on a new home in Minto’s Queen’s Landing Development near 2nd Concession and Doane Road.

“I told my fiancée, we got to do what it takes (to get in the first phase),” he said.

What it took for Gumbs was to have a sleeping bag ready in his car and when he got a call from his family that people were congregating at the sales centre on a Thursday, Feb. 5, two days before the Saturday opening, he drove up to get in line.

It turned out to be a false alarm as Minto was hosting a Friends and Family event at the sales centre, but Gumbs was ready to camp out two nights to get first crack at the home he wanted. 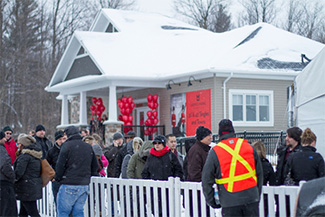 Technically, Gumbs was 2nd in line.

When he arrived at the sales office, Vikas Ahire was already waiting. Ahire and his wife, Pratiti, live in Scarborough with their five-year-old daughter and were looking to find a place to live with more green space.

“We wanted to be away from traffic in a nice homey environment,” Pratiti said. While she grew up in Richmond Hill, she said her husband was raised in India, and they both value open space.

Luckily for Gumbs and Ahire, a representative from Minto told them they didn’t have to stay overnight that night and that as long as they returned by 7 a.m. the next morning, they would be first in line.

It was a good thing the two families got there so early because the line ballooned as Friday afternoon stretched into Friday evening.

Gumbs said about 200 people stayed overnight in a heated tent to get a chance to buy 90 detached houses and townhomes in the 660-residence development.

“People were panicking. They were worried they weren’t going to get a house,” Gumbs said. When people asked him what his wristband number was, he didn’t want to tell them he was No. 2. While the situation easily could have slipped into chaos, Gumbs and Pratiti both complimented Minto on how well organized everything was.

“It was awesome just talking with everyone. These people are going to be your neighbours,” Gumbs said. 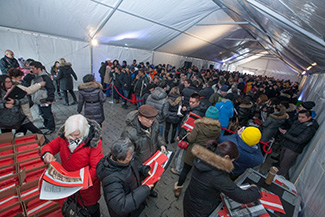 “We got to know a lot of the neighbours in the tent,” Pratiti added. “We still talk to this day.”

As Saturday morning rolled around, the line of cars on Doane and 2nd spanned as far as the eye could see. Gumbs said he saw wristbands going to people with the number 800.

It certainly wasn’t your typical housing release. Even Minto was a little surprised at the demand.

“The launch of Queen’s Landing exceeded all expectations and surpassed every Minto record. The response to this community has been outstanding and it speaks to the demand for affordable family homes in such a wonderful neighbourhood,” said Amanda Wilson Watkins, vice-president of marketing and sales.

When the sales office finally opened at 11 a.m., Gumbs’ and the Ahires’ long wait had finally paid off.  They walked in and each became first time homeowners.

“It was pretty cool. Everybody was signing and very happy telling you congratulations. There were a lot of young families,” Gumbs said.

The homes aren’t scheduled to be completed until 2016 and 2017, so the new neighbours will have to wait a little while longer to joke about the time they spent 30 hours together in a tent.